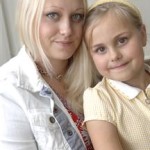 “A young mum has told of her heartbreak after she and her only child were diagnosed with an incurable disease which will cut short their lives.

Leanne Bell, 26, and five-year-old Alicia discovered on the same day they have vascular Ehlers-Danos syndrome (EDS) – a rare genetic condition lowering the life expectancy of sufferers to just 48.

Caused by low levels of collagen and affecting one in 250,000 people, it weakens the skin, joints, blood vessels and organs.

The news has left Leanne struggling to come to terms with the fact she may not see her daughter grow up.

“I’ve had this since birth but because it is so rare it hasn’t been spotted before now. I’ve always had transparent skin which I’ve hidden away, and suffered from fatigue since I was a teenager. We found out when we went to see specialists at a hospital in Cambridge.

“To be told that I may not live to see my daughter grow up and to know that my baby girl has been given the same fate is a terrible feeling.”

People with vascular EDS have blood vessels and organs which are fragile and prone to tearing, with skin easily bruised and wounds slow to heal.

It means Alicia, who goes to St Mary’s School, Whitstable, will never be able to play sports with her friends for fear of seriously injuring herself.”

Leanne Bell and Alicia, five, have the same incurable disease

“The most common cause of sudden death in EDS is the rupturing of major arteries, mainly occurring when sufferers are in their 20s or 30s.

About one in four people with EDS develop a significant health problem by the age of 20 and more than 80% develop life-threatening complications by 40.

Leanne said: “As a mum I will miss seeing Alicia get married and all the other stuff I should be a part of.

“I want to do something positive so she can remember us having fun together.

“I want her to have photos and clips to put in her memory box to remember me by.

“I want her to go to Disneyland. I know she won’t be able to go on the rides but I want her to see the carnival. I’d like to do lots of things with her while I still have the chance.”

Now off work, Leanne divides her time between hospital visits across the country and teaching her daughter how to stay safe.

She said: “We have to deal with what we have been given.

“We will be under observation for the rest of our lives and seen by specialists.

“I have spoken to Alicia and her school and told her she has to avoid any contact or anything that will risk a rupture. We’ve said she has to be careful and look after herself.”

Friends of Leanne have organised a charity football match at Chartham memorial ground on Saturday, October 12, to raise funds for Ehlers-Danlos Support.

The game will be played by Chartham Real Stars and Gillingham Ladies and was organised by close friend and Chartham footballer Tom Marsh.

Leanne said: “We need to raise awareness so that others can recognise the signs. More research needs to be done to give us hope of a cure in the future.”

Businesses have been asked to donate prizes for a raffle on the day.

Mother and daughter are both learning to manage their challenge with Ehlers-Danlos Syndrome.

Click here for the original source of this article.

We appreciate your Likes and Comments.