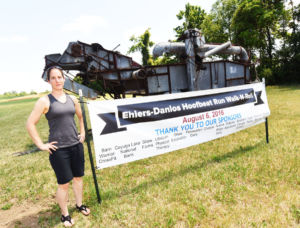 Thank you to all who participated in, volunteered at and donated to the Ehlers-Danlos Hoofbeat Run Walk-N-Roll on August 6th.

KING FERRY — Elizabeth Shaw loves to swim, bike and practice CrossFit. She has cycled around every Finger Lake, and for about three years, she has been a local personal trainer, helping others enjoy fitness activities as much as herself.

But Shaw, who speaks softly in a matter-of-fact tone, will be leaving King Ferry and personal training behind for the College of Naturopathic Medicine in Arizona. It’s her new start on life after being diagnosed with Ehlers-Danlos syndrome, a hereditary connective tissue disorder that makes Shaw hypermobile, prone to injury and constantly fatigued.

“My entire life has changed,” she said. “I’m a personal trainer, but I can’t exercise much anymore, and so that’s kind of frustrating, and I feel like I’m not very effective so I just need to change my life anyways.”

The 29-year-old sat at her parent’s picnic table Wednesday in the yard of Shaw Farms, her hair tied back in a tight braid. She wore a gray sports halter top, black shorts and sunglasses on her head.

Before she takes off across the country, Shaw has organized a half-marathon, 5K and one-mile walk, run and wheelchair roll to raise awareness of the syndrome that she said took a geneticist to diagnose. The Ehlers-Danlos Hoofbeat Run Walk-N-Roll will kick off her town’s annual Wheat Harvest Festival on Aug. 6.

The word “hoofbeat” comes from what Shaw said many medical professionals are told to look for — horses, not zebras. Horses, she said, are considered the more common explanations for symptoms. Zebras are the more rare possibilities. EDS is considered a zebra, and Shaw said only 5 percent of those who have it have been diagnosed. The problem, she thinks, is that most doctors aren’t looking for zebras in the first place. Many times the symptoms appear common, like chronic pain and fatigue. But there are six kinds of EDS, and Shaw said it took her a year to get a diagnosis. Even after the geneticist she saw verified her condition, he did not have anyone to refer her to.

“I’ve had multiple doctors say there’s no point diagnosing it, because they say there’s nothing you can do, but that’s not true,” Shaw said.

That’s where naturopathic remedies have come in. By altering her diet, Shaw said her joint pain has gone down significantly. She also sees a chiropractor and a physical therapist to help manage her symptoms. While the changes have not made her feel comfortable enough to keep personal training, she said she feels like she’s made a lot of progress over the years.

She hopes others will learn and understand that EDS is out there — and, despite what some doctors may say, it’s manageable.

“I want to raise awareness to the public, because now that I know what I’m looking at, I think I can see it in a lot of people,” she said. “If I can allow them to see it in themselves, then they can hopefully get diagnosed, and then the more people who are diagnosed, hopefully it’ll become easier for doctors to diagnose and more recognizable, and to know that it’s not rare.”

She said the longer people wait to be diagnosed, the more they risk becoming disabled.

As of Wednesday, Shaw said 25 people had signed up for the race, but she hopes to enroll more. The goal is to raise $500 for EDS Awareness, an online program that provides resources and webinars about EDS. If she raises more, Shaw said, what’s left over will go to the Ehlers Danlos Syndrome Alliance, an EDS group that conducts research under the U.S. Food and Drug Administration.  (We actually had 62 participants and raised just about $2,000.)

The event will be her first and last, she said, as she’s not sure she’ll return to New York, at least not to settle down. Once she finishes school in Arizona, she said she plans to work somewhere where naturopaths are not as limited in what they practice.

Click here for the original source of this article
We appreciate your Facebook Shares, Likes and Comments