Maddison Parker is looking forward to having five minutes with Australian Prime Minister Tony Abbott to talk about Ehlers-Danlos Syndrome. Her persistence seems to be paying off – she is awaiting a date and time to be confirmed for the meeting. 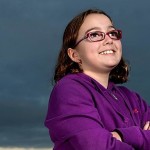 “MADDISON  Parker is one step closer to getting five minutes with Prime Minister Tony Abbott.

For two years the 11-year-old from Caroline Springs has been pleading with the Prime Minister of the day for five minutes so she can show them why they should support research into Ehlers Danlos Syndrome.

And it seems her persistence may have paid off.

Her mum, Kathy Parker, and staff from Mr Abbott’s office have both confirmed contact has been made and the wheels are in motion to arrange a private meeting between the two.

And Maddison is beside herself with excitement.

Mrs Parker said the family was told Mr Abbott had a lot going on with the MH17 disaster, but was assured he wanted to meet Maddison when he next visited Melbourne.

“We are hoping it will be in the next few weeks and Maddison is already busy preparing for the meeting,” Mrs Parker said.

Maddison was collating an information package so Mr Abbott was in no doubt of the facts of EDS, she said.

“I’m not sure Mr Abbott knows what he is getting himself into with her, I’m pretty sure she will be making the most of this meeting and pushing for 10 minutes instead of five.

“It’s given her a new lease on life.”

Maddison said she couldn’t believe it.

“I’m so excited and I just can’t believe this is really going to happen,” Maddison said.

The family is now eagerly waiting for a day and time to be confirmed for the meeting.”

Maddison has been very active in Australia promoting EDS Awareness.