Telling My Teammates “I Have Ehlers-Danlos Syndrome” 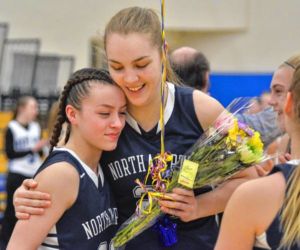 Lauraine Joensen, center, of Northampton, gets a hug and flowers from Hannalise Rivera-Lovett after she scored her 1001st career point during a game against West Springfield, Friday in West Springfield.

She was playing in a summer league basketball game at JFK Middle School between her sophomore and junior seasons to stay fresh for the winter.

Everything above her knee went one way, everything below went the other.

The torque caused a subluxation of the kneecap. Instead of popping out of place, a dislocation, her kneecap popped out then back into place.

“It moved over to the side of my knee and moved back,” Rivera-Lovett said.

She sprained her MCL and LCL while partially tearing her ACL. Doctors wouldn’t perform surgery on the partially torn ACL, so she went to physical therapy and worked her knee back to playing strength. She knows at some point the ACL will tear completely.

“I’ve kind of come to accept that whenever it happens, it happens,” Rivera-Lovett said. “It’s kind of nerve-wracking playing with that issue.” 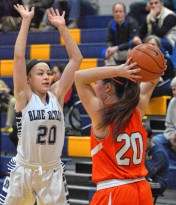 Until then, the senior plays and provides the Northampton girls basketball team, which is preparing for the Western Mass. Division 1 postseason, an infusion of energy every time she steps on the floor.

Rivera-Lovett has become accustomed to managing more aches, sprains and dislocations than the average athlete. She suffers from Ehlers-Danlos syndrome (EDS), hypermobility type 3. According to the U.S. National Library of Medicine, it’s a “group of disorders that affect the connective tissues that support the skin, bones, blood vessels, and many other organs and tissues.”

There are nine types of EDS that vary in symptoms and severity. Type 3 is the most common.

Rivera-Lovett deals with consistent aches that vary in location and intensity. The pain comes from an over-stretching of joints. Her blood struggles to clot, and her skin is soft, softer than it should be, and stretches.

Rivera-Lovett’s pupils dilate more than people are used to. She’s more flexible than most.

“I can do weird things. I can do stuff like touch my thumbs to my wrists. Things bend weird, but it also means that things bend in a way that they shouldn’t,” Rivera-Lovett said. “Because of the way my body works it wouldn’t stretch like yours does. It’ll stretch and then break, stretch and then tear.”

“Ehlers-Danlos is not a fatal disease. It’s a quality of life issue, and it can be disabling,” said Dr. Larry Zemel, a pediatric rheumatologist at Shriners Hospitals for Children in Springfield.

Rivera-Lovett has dealt with the condition her entire life but only been able to attach a name to it for a year and a half.

Read more at the original source of the article.