Three weeks ago Theresa  was finally diagnosed with Ehlers-Danlos Syndrome, a connective tissue disorder that affects her joints.  She finally found a name for the pain! 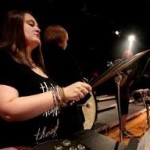 HANOVER — Several months ago, Theresa Selfe decided to take a walk, not realizing how much she would regret it.

She sat down for a while after returning home and when she got up, she felt a pop in her hip, followed by intense pain.

Her mother, Sherry, rushed her to an urgent care, but no one could figure out why she was in pain. Everything looked normal, and the steroid shots and pills they gave her didn’t seem to help.

It wasn’t the first time the Hanover teenager left the doctor’s office with no answer. Since puberty, Theresa has been living with mysterious joint pain that’s made it difficult to walk, dance, drive and do many other things the high school honors student wants to do.

But several weeks ago, she learned that the cause of her pain had a name: Ehlers-Danlos Syndrome.

Theresa, 16; her sister, Erin, 9; and her brother Andrew, 14, all were diagnosed with the connective tissue disorder three weeks ago by Dr. Brad Tinkle, a clinical geneticist at Advocate Children’s Hospital in Chicago.

Known as EDS, the disease can affect the strength of skin, joints, muscles and organs. It can cause joint pain and problems with the digestive or cardiovascular systems.

For Erin and Andrew, an EDS diagnosis is just part of the puzzle. Their sister Katy, 11, also has several medical problems Tinkle was not able to diagnose.

But for Theresa, a junior at Licking Valley High School, finding out she had EDS was life-changing.

Theresa always has been able to do what her family calls “party tricks.” She can bend her fingers back to her wrists, put her fist in her mouth and bend her arms behind her enough to rub her own shoulders.

They were funny when she was a little girl, but when she turned 12 she started complaining about pain in her legs. Doctors told Sherry she was experiencing growing pains, but the trouble started spreading to her back, neck, shoulders and hips.

By the time she was 13, she had stopped most of the sports and activities she enjoyed because it hurt to move. As she started high school, she began complaining of more pain, gastrointestinal problems, shortness of breath and dizziness. It was hard to keep up with school work and she was constantly exhausted.

No one could tell Sherry and Robert what was wrong. Complicating matters further, they were struggling to find answers for their other children.

Andrew was experiencing dizziness when he stood up, migraines and nosebleeds. Katy has acid reflux, gastrointestinal issues and also was experiencing debilitating headaches and incidents of vomiting while she slept.

Although they were worried about their older kids, the Selfes had to focus their financial resources on helping their youngest daughter, Erin, who began experiencing severe gastrointestinal problems when she turned 6.

Simply eating a piece of fruit or candy made her violently sick. She was losing an alarming amount of weight and was embarrassed to go to school.

After working with doctors and nutritionists, the Selfes determined Erin couldn’t tolerate lactose, soy, gluten, fructose or sucrose. They also learned her body doesn’t metabolize most of the food she eats.

For the last seven months, Erin has been on an extremely restrictive diet which has eliminated most of her gastrointestinal symptoms. She was able to go back to school and has more energy.

But she still has headaches, skin discoloration and trouble sleeping. She transitions from periods of insomnia, in which she sleeps for just a few hours, to hypersomnia, when she sleeps for more than 16 hours.

As she continued looking for ways to help Erin, Sherry began noticing similarities between all four of her children. They all experienced headaches and gastrointestinal problems, although Erin’s were the most severe.

Erin was showing extreme flexibility, just like Theresa had when she was younger. And she already was starting to complain that her joints felt weak.

Sherry realized there might be a connection between all four kids’ medical conditions. The more she researched, the more she wondered if they had EDS.

After researching the disorder, she decided to bring the whole family to Chicago to be examined by Tinkle, who wrote a book on the syndrome.

The family was struggling with medical bills, and Sherry wasn’t sure if they would be able to afford the trip. But after receiving donations from close friends, the U.R. Our Hope Foundation and an anonymous donor, they left Hanover on Sept. 10.

Tinkle examined each one of the kids, measuring their joints and testing their flexibility. He also went over the family’s genetic history.

“For the first time, I felt like someone was actually listening to the whole story,” Sherry said.

He told Sherry and Robert that Erin, Andrew and Theresa have EDS-hypermobility type, which means their joints have a greater range of motion.

EDS is a genetic disorder, so it is common to see siblings with the disorder, Tinkle said. An EDS carrier has a 50 percent chance of passing it along to their children.

Although both men and women can have EDS, women experience more pain because of hormonal differences.

In addition to struggling with joint pain, people with EDS often have low blood pressure, which causes headaches and dizziness, and intestinal problems. Their skin is often weaker and slower to heal. Women are at risk for complications during childbirth, Tinkle said.

“It’s a whole-body disease,” he said.

Katy isn’t showing many signs of the disease yet, but should be closely monitored as she goes through puberty, he said.

For Sherry, hearing Tinkle diagnose her three children was bittersweet. After years of being told she was making up symptoms, or pushing too hard, she said it was amazing to know she had done the right thing for her kids. But hearing that her children have a chronic, incurable disease was painful.

“It was validating. He validated our experience and the emotions of it, but it sucked to be right,” she said.

Immediately after being diagnosed, the Selfe children began working with physical therapists in Tinkle’s office, who taught them exercises they can do at home.

“They need to learn how to control their joints,” Tinkle said. “You have to teach the muscles to engage and do joint protection. It’s kind of a baby steps process because you have to learn to do things differently.”

Now that they are back home, the siblings are helping each other do their exercises every day. They have to practice walking, standing and sitting correctly.

Sherry is searching for a physical therapist specializing in EDS who can work with them several times a week.

“They can’t only do physical therapy until they feel better,” she said. “It will be lifelong.”

Theresa’s body already has been damaged by the disease. Her pelvis is twisted and her shoulders are uneven. Physical therapy should provide some relief, but it’s likely she’ll live with some pain the rest of her life, Sherry said.

Sherry and Robert are hopeful the physical therapy will keep their younger children from hurting themselves and help them learn good habits.

“If we don’t start to correct it now, it can cause a lot of pain later,” Sherry said. “Hopefully they won’t have as much pain as Theresa.”

When their children were undiagnosed, Sherry and Robert were forced to pay for many of their doctors’ appointments, supplements and other medicines out of pocket. The diagnosis from Tinkle should bring some financial relief, Sherry said.

Although the family’s private health insurance will cover 20 physical therapy appointments a year for Erin, Andrew and Theresa, the family likely will have to apply for a waiver for more sessions or pay for additional appointments out of pocket.

With a diagnosis of EDS, there is a chance the three siblings will be able to qualify for secondary insurance through the Bureau for Children with Medical Handicaps, but Sherry is unsure if they will be eligible for the program.

That would help pay for additional physical therapy and an in-patient program at the Cleveland Clinic that would help Theresa better manage her pain.

Without the secondary insurance, the clinic would cost about $45,000.

“It will drastically change things if we can get that help as far as future treatments,” Sherry said.

In addition to trying to pay for physical therapy, the Selfes still have to find a diagnosis for Katy and continue to investigate the cause of Erin’s metabolic problems and sleep issues.

A group of friends — Courtney Moore, Brandi Trout, Autumn Dean and Amy Gartner — have organized a dodgeball tournament on Oct. 12 to help the Selfes with their future medical expenses.

Since EDS is not well known, Moore and the other event organizers have been trying to spread the word about what the family has gone through.

“I feel like they felt so alone,” she said. “Licking Valley has always been a community that always helps so I thought it would be something that everyone could grab on to.”

Since she announced her diagnosis on her Facebook page several weeks ago, Theresa has spent a lot of time thinking about how EDS will affect her future.

She’s looking at colleges and now has to think about what accommodations she’ll need — such as elevators in her dorm or access to a physical therapist.

“She is getting ready to go away and she will be on her own,” Sherry said. “She really needs to be empowered to start taking care of her own health.”

Right now, Theresa is hoping physical therapy will help her get strong enough to get her driver’s license.

She worked all summer to raise money for a school trip to Europe and plans to work hard in physical therapy so she can keep up with her classmates.

Other than focusing on physical therapy, Theresa has to learn to listen to her body, Tinkle said.

“You have to be prepared to struggle every day. Pacing is very important and you have to do things correctly,” he said. “It can be difficult if you have a certain drive (to do something), but your body wants to leave you behind. You have to be able to deal with that.”

She’ll have to decide if she uses medication to deal with her pain or other coping mechanisms, Sherry said.

“Anytime she taxes her body, she’ll pay for it,” Sherry said. “She’ll have to make a lot of decisions and it won’t always be easy.”

Right now, Theresa has decided to try to make her junior year as normal as possible. That means keeping up with school and participating in show choir, marching band, plays and the Prevent Assault and Violence Education program.

One thing that’s made things easier is being able to find other teens with EDS on social media sites, she said.

“I’m glad that now I have a community to talk to and say, ‘Hey, this is what’s happening to me,’” she said.

By learning more about people living with EDS, Sherry hopes Theresa and her sibling will see they have challenges to overcome but their dreams shouldn’t be limited.

“I want her to be strong, I want her to go on with her life even though it might not be what she imagined it would be,” she said. “We want to make sure (our kids) live a happy, fulfilling life.”