British author Angela Clarke’s new book #FollowMe went to number three in the Kindle chart! The crime thriller set in London features a ‘Hashtag Murderer’. Angela was diagnosed with EDS in 2012. Her previous best-selling book is titled Confessions of a Fashionista.

‘This is Angela Clarke’s debut and what a way to kick off. I loved this book from start to finish, I was left truly shocked when the identity of the murder was revealed – it takes a clever writer to do this. Follow Me was unnerving, unsettling and just brilliant.’ NAT 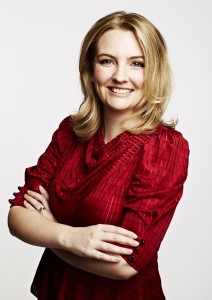 For ten years Angela Clarke lived the high life in London, partying with celebrities and wearing designer clothes – she even chronicled her adventures in best-selling book Confessions of a Fashionista.

But when the St Albans writer was diagnosed with a rare condition that left her with severe joint problems that caused her neck to dislocate, she found herself living more and more of her life online.

“I have a degenerative connective tissue disorder called EDS III (Ehlers-Danlos syndrome), which sometimes compromises my mobility, explains the 35-year-old.

“When that happens social media is my life and I hang out there with all my friends without having to leave the house.”

But while it provided a lifeline, Angela also discovered that spending more time on Twitter, coupled with writing feminist articles for the national media, brought with it a darker side in the form of abusive and threatening messages from trolls.

“I knew it went on but it’s a weird cold feeling and you have that awful ‘oh god this person wants to hurt me’, moment,” says Angela recalling the first time it happened.

“There was definitely period of time when if my phone flashed or beeped I was extremely anxious.”

The trolling has now gone to the extreme with messages saying she should be subjected to extremely violent acts coupled with graphic images.

But the writer, who grew up in Watford and Redbourn, has found a unique way of confronting her abusers, by printing the messages word for word in her debut novel #FollowMe. The crime thriller set in London features a ‘Hashtag Murderer’ who posts chillingly cryptic clues online, pointing to their next target, taunting the police and enthralling the public who start following him online.

“If anyone wants to come forward and put their name to the tweets I will definitely give them credit,” says Angela with a wry laugh.

She has never been tempted to quit social media and wants to use her book to help people understand the complex issue.

“It’s too easy to be dismissive and say ‘well just turn it off the computer’ but it’s my life and my job and I shouldn’t feel frightened.

“I wanted to write the book to make people realise how important social media is and not just something silly.”

These days she is a whizz at blocking and reporting those who ‘spew horrible hate-filled things’ and her skin is ‘much thicker’. In fact she has become fascinated with why people are driven to become online abusers, researching all ends of the spectrum, from those going through an emotional crisis who use strangers like a punchbag, to those who are ‘only joking’ to the two trolls jailed for abusing campaigner Caroline Criado-Perez on Twitter.

“There is often a leader and an element of playground bullying in it.

“It is quite a mixed bag but running through it all is this thing that a lot of people just genuinely forget that there is someone real on the other end.”

The former pupil of Redbourn Junior School and Roundwood Park School in Harpenden who used to work at WHSmith in St Albans, adds: “One of the things I wanted to look at in the book is the way technology is developing so quickly that we are having the ability to do things before we have caught up with social norms and etiquette or laws in how best to use them.

“Fifteen years ago Twitter didn’t exist and there are now 15 million people in the UK who use it. We are still in the angry teen stage and getting used to boundaries. I hope we will all get better at it.”

The book features ambitious police officer Nasreen and investigative journalist Freddie who grew up in a fictional town called Pendrick and Angela laughs: “It may bear quite a strong resemblance to St Albans.”

She moved back to the city in 2010 and this year enjoyed a sell-out run of her debut, Harpenden-set play The Legacy at The Hope Theatre in Islington and won the Young Stationers Prize.

She was diagnosed with EDS in 2012 and goes to physio three times a week to try and build up her strength, but has to walk with a stick most of the time and this year alone has dislocated her shoulder and jaw twice, little finger and hip.

“I’m basically fighting to hold my body together and move around. I may end up in a wheelchair or deteriorate to the point where I can’t move around. In 2013 I had my biggest flare up, which was caused when I dislocated my neck and I couldn’t walk for a number of weeks and it took me a year to recover. After seven months I was able to type for an hour, three days a week.”

These days she does most of her writing at home from a special ‘pimped’ chair with neck pillows and supports and after #FollowMe went to number three in the Kindle chart she started work on a follow up, due out next summer.

“It’s no coincidence that I have gone from writing about fashion in a very upbeat and almost romantic comedy way to writing about crime and the shadows in the corner of the room and the darker side of life.

“My condition has made me look at things in a different way. But it is also a good thing because I’m white, middle class and live in St Albans, I’m comfortable – all things that make me pretty standard, and having a disability makes me other, and gives me different viewpoint on things and that’s a good thing when you are writing.”

#FollowMe is out now and available in Tesco stores and on Kindle with a wider release on December 31.

Angela will be at Waterstones in St Albans on Saturday, January 30 from 6.30pm to 7pm signing copies and talking about her book. Details: angelaclarke.co.uk

Click here for a the original source of this article