We are pleased to announce: Jane Mitakides has been appointed to the Ehlers-Danlos National Foundation (EDNF) board of directors. Her husband, Dr. John Mitakides, is one of our Educational Webinar speakers and a well-known EDS / TMJ expert. Jane has a background in strategic marketing and communications, and will be a valuable asset to the EDNF. She will serve on the board for two years. Her goals are to increase EDS awareness and to further the mission of the foundation. 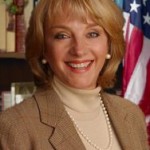 Jane Mitakides of Washington Township was recently named to the National Ehlers-Danlos Foundation Board. She is devoted to not only advocating for a cure, but also helping patients receive accurate diagnoses.

“​​Jane Mitakides, a local businesswoman, has been named to the national Ehlers-Danlos (EDS) Foundation board of directors. She was appointed to the board in July during the EDS Foundation national conference in Houston.

Mitakides, a resident of Washington Township, became an advocate for a cure for this disease six years ago when she attended a national conference in Baltimore.

“My involvement began when I joined my husband, John for the conference and I had no idea what I was walking into,” Mitakides said. “I was totally unfamiliar with Ehlers-Danlos and I encountered more than 2,000 people who made the trip in various types of braces and wheelchairs.”

EDS is a genetic disorder of the body’s collagen and connective tissue, affecting patients in a spectrum of ways – from joint hyper mobility to vascular disorders, some of which can be terminal. Currently there is no cure for the disease.

Inspired by what she saw at the conference, Mitakides knew she wanted to be involved in the work of the foundation. Her husband, Dr. John Mitakides, has focused his Beavercreek dental practice on TMJ (Temporomandibular joint disorder) and craniofacial pain treatment for more than 40 years. He has specialized knowledge of EDS since the vast majority of his patients have the disease.

“I began working with the foundation and continued for several years after that first conference,” Jane Mitakides said. “People say that Parkinson’s or the MS (Multiple Sclerosis) patients are well informed and know more about their diseases than their physicians do. EDS patients are always looking to find information and answers. I am driven to help them find those answers.”

Mitakides, who has a background in strategic marketing and communications, said that though she isn’t a medical professional, she is devoted to helping advocate for a cure for EDS and help patients dealing with the disease.

“It (EDS) isn’t a rare disease, it’s a rare diagnosis,” Mitakides said. “Individuals may have one symptom, but physicians frequently don’t realize that other symptoms may be related.” These symptoms include easily dislocated joints, popping or locking jaws, and even mitral valve prolapse in the heart.

Mitakides will serve on the national foundation board, located in Virginia not far from the Washington, DC, for two years and during that time will help increase awareness of the disease and of the mission of the national foundation. Though it is estimated that 1,500 to 2,500 people are born with EDS each year, it continues to be frequently misdiagnosed.”

“I would like to see people become as aware of EDS as they have become of Autism and ALS (Amyotrophic Lateral Sclerosis),” Mitakides said. “I don’t think we can hope that rock stars or former presidents will be dumping ice buckets on their heads, but we can hope for a future when people hear EDS, they won’t question it and every pediatrician will screen for it.”

EDSawareness.com shares her passion and hope for a better future for Ehlers-Danlos patients. Together we can achieve our goals! Jane and John Mitakides are strong advocates for Ehlers Danlos Syndrome and will be a proficient team to help guide EDNF.

Click here  for the original source of this article