Freezing Vagus Nerve for Weight Loss can be Dangerous! 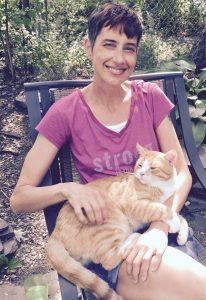 Tiffany Mielcarek, who says her vagus nerve was damaged by a neurological disease, uses a feeding tube.

Tiffany Mielcarek was aghast when she saw NBC’s Today Show hype an experimental weight loss procedure that freezes a branch of the vagus nerve that sends hunger signals to the brain and regulates digestion.

“They were talking about it as if this were a miracle. No risks were brought up at all,” said the 48-year-old Ohio resident, who has a digestive disorder called gastroparesis, which can be caused by damage to the vagus nerve. “It just struck me as very irresponsible.”

Tiffany Mielcarek, who says her vagus nerve was damaged by a neurological disease, uses a feeding tube.

She wasn’t alone in her concern. Nearly 100 comments about the segment were posted on the Today Show’s Facebook page, most expressing shock that the program didn’t broach any potential risks of a procedure that has only been studied for a few months in a handful of patients.

Similar imbalanced coverage about the procedure — undergoing a clinical trial at Emory Healthcare — ran in other news outlets including ABC and Fox affiliates.  We previously wrote about the Today Show coverage.

Many commenters said they have gastroparesis, a rare and sometimes debilitating condition in which the stomach doesn’t properly digest food. Gastroparesis can be caused by damage to the vagus nerve from surgery or, it’s hypothesized, from hyperglycemia induced by diabetes. In some cases, the trigger isn’t known.

Some people in the Today Show audience chuckled when Melissa Donovan, the first woman to get the nerve-freezing procedure, exuberantly proclaimed: “I forgot to eat!” Donovan said she lost 25 pounds as a result.

But losing your appetite is a grave matter for people with gastroparesis, who commonly experience nausea and vomiting, problems with blood sugar levels, and weight loss. They can be prone to depression, partly because they can’t share normal meals with family and friends. Some resort to liquid diets and feeding tubes.

The Today Show segment struck fear in some gastroparesis patients that people desperate to lose a few pounds would join a clinical trial for the vagus nerve freezing procedure without understanding the potential harms.

“This is a life sentence for us,” said advocate Melissa Adams VanHouten, who administers a 19,000-member Facebook page called the Gastroparesis Support Group, where the Today Show segment was shared. “We can’t believe that anybody could know this disease and still participate in a trial, with even a small chance of something going wrong.”

Emory doesn’t mention any potential harms in promotional material for the nerve-freezing procedure, which it said was proven safe in a pilot study of 10 patients observed for 90 days.  Those results were presented at a scientific meeting of the Society of Interventional Radiology and have not been published in a peer-reviewed journal.

The study is being funded by HealthTronics, a medical technology company that makes the ablation probes used for the treatment.

Click here for more information about Gastroparesis and other Gastrointestinal issues.

Tiffany is a member of the Cleveland Ohio EDS Support Group

1 thought on “Freezing Vagus Nerve for Weight Loss can be Dangerous!”