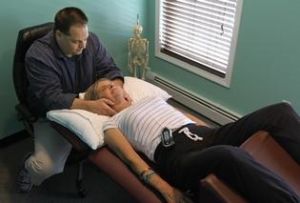 Ellen Lenox Smith’s recurring injuries and ailments were as baffling as they were disabling.

Why was she always in such pain? Why did she have difficulty swallowing? Why did she keep tearing cartilage and ligaments in her knees and shoulders?

And why at night did she sometimes struggle to draw a breath and wonder, “Will I be awake the next day?”

When she finally was given a diagnosis — Ehlers-Danlos Syndrome — Lenox Smith remembers being excited.

“I went home and thought, ‘Now I can get better,’ ” she recalls. “Then I read about it and saw it was incurable.”

The genetic connective-tissue disorder was taking an inexorable toll on her body, she was told, and while she might live a long life, eventually she would probably “die a Lou Gehrig’s-like death,” bedridden and choking on her own mucous.

More than a decade later, after 23 surgeries — some of them rare and risky — Lenox Smith, 66, is still fighting for her life.

Click here for more information and a link to purchase Kevin Muldoney’s book “Living Life to the Fullest with Ehlers-Danlos Syndrome.”.

Click here for a link to purchase Ellen Lenox Smith’s book “It Hurts Like Hell: Living with Chronic Pain and Having a Good Life Anyway.”