Brynn had a long history of adverse reactions to many foods she was eating, but finally determined it was not traditional food allergies! She has found ways to manage her Mast Cell Activation Syndrome – including EpiPens and a service dog. 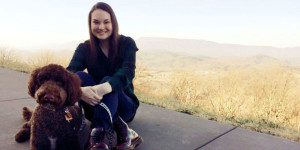 Brynn Duncan was 11 years old when her stomach started to revolt against food. Frequently when she ate, she would get sick. At first she chalked it up to a stomach flu, some transient but lingering virus.

Then one year passed. And another. For seven years, her inexplicable difficulty with digestion continued.

“I went to all kinds of doctors and no one knew what was going on,” laments Duncan, now 21, of Greenville, South Carolina.

By 2011, when Duncan was a sophomore in high school, her health was declining at an alarming rate. She lost “a ton” of weight and could barely keep down food. Her mysterious illness compelled her to drop out of school and become homebound.

Duncan’s sporty lifestyle, which had once included kicking butt as a black belt in tae kwon do, ground to a halt.

“I went from being very active to being wheelchair-bound,” she says. “It’s crazy to realize things can change so quickly.”

One day after getting sick, she realized something weird. Why was it that every time she ate certain foods — like a banana — her tongue and throat would itch?

Naturally, she Googled the question. Food allergies, she learned, might very well be the culprit.

At a subsequent appointment with an allergist, she underwent needle prick testing, in which several dozen allergens are injected in tiny amounts into the skin of her back — everything from pollens to grass to foods and animal hair. If someone is allergic to a given substance, the skin will quickly produce a red hive at that spot.

After the test, Duncan’s entire back flared with huge, itchy hives.

The allergist couldn’t stop shaking his head. “This is unreal,” he told her. “We’ve never seen this before. There has to be something else causing this.”

After a major amount of research over the course of a year, her parents found out about mast cell disease, also called Mast Cell Activation Syndrome.

Mast cells are an essential type of cell found in your stomach, intestines, skin, lymph nodes, and internal organs. They help protect your body against disease by sounding an alarm to activate your immune system when a foreign invader is present.

In some rare cases, however, people are cursed with too many mast cells. This triggers symptoms throughout the body, such as abdominal cramping, nausea, vomiting, low blood pressure, and anaphylaxis.

According to Dr. Lawrence Afrin, a world-class expert on mast cell disorders, the syndrome, which was first recognized in 1991, is usually acquired early in life “via unknown mechanisms. Interaction of environmental factors with inheritable risk factors is one possibility.”

As soon as Duncan’s parents read about the disease, they took her to a hematologist — a doctor who specializes in blood disorders.

Within 10 minutes of examining Duncan, he was sure she had mast cell disease. The tricky part was confirming his suspicions through testing.

The diagnosis relies on catching elevated levels of certain chemicals in the blood, which can go from normal to off the charts and back to normal within 45 minutes. Basically, the patient has to be having an allergic reaction at the moment of testing in order for doctors to identify the presence of the disease.

Soon after her visit with the specialist, Duncan experienced a terrifying anaphylactic reaction and passed out after gasping for breath. Her mom rushed her to her pediatrician, since Duncan would be treated faster there than at the ER.

As she was receiving treatment, which counters the dangerous buildup of histamine in the blood, her pediatrician called her hematologist, who said to draw blood.

The results were decisive: Duncan had mast cell disease.

It was 2012. That year, she suffered through a staggering 30 hospital admissions — not including ER visits. She was 18 years old. While her friends were graduating from high school, she was sicker than ever.

No cure is available, so treatment is aimed at managing and controlling the body’s errant immune system responses. Because every patient is different, finding the right combination of therapies is a process of trial and error.

“It completely turned everything upside down,” Duncan says of her illness’s progression.

Because so many foods trigger allergic reactions, one major help has been her permanent feeding tube that sends nutrition straight into her intestines. It allows her to bypass food altogether and receive nutrients through a special hypoallergenic formula.

One recent morning, for example, she woke up and ran formula through her tube for breakfast, and drank a little apple juice. When she does venture to eat, it often backfires even if the food is not an allergy trigger. This is because she also has gastroparesis, a paralysis of the stomach that inhibits digestion.

“A lot of times I’m hungry and have to decide if I want to eat something and then pay for it,” she says. When pressed to name foods she can tolerate, she pauses. “Apples. I’m adding berries slowly, which is very exciting. Sour Patch Kids.”

To make matters worse, the “safe” foods that she can tolerate can change overnight. One day, she could eat strawberries without incident and the next day, they could cause anaphylaxis.

Needless to say she carries EpiPens at all times. Just last week, she needed two in less than 48 hours.

Brynn continues to focus on her treatment for Mass Cell disease. She now has a plan to make this situation better and manage her symptoms. Read more…