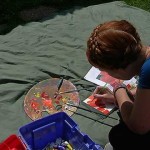 Megan is a talented artist with Hypermobile EDS. Watch her video story featured on a Philadelphia TV news station.  This is a good example of how patients can spread awareness of Ehlers Danlos Syndrome in their local communities.

EDS Awareness Notes:  In media reports, there tend to be some  inaccuracies or misleading statements. We wanted to point out that this news report portrays EDS as more rare than it actually is. And the doctor generalizes that EDS patients can stretch their skin 4 inches.  (Stretchy skin is typically seen only in Classical Type EDS – and not to this extreme. Megan has Hypermobile Type EDS.) Some inaccuracies are bound to happen in the media, but this should not deter us from getting the word out!

“Pain is a very personal thing, and when you appear fine, trying to convince others of how much pain you’re in can be tough.

Such is the life of those living with a very rare genetic disorder.

“I had problems since I was little,” said Megan Purcell.

This is the result of a rare condition called, Ehlers-Danlos syndrome.

“It caused a lot of problems with my joints for a couple of years. I couldn’t figure out why and they mentioned this disease to me,” she said. 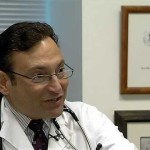 Ehlers-Danlos is a genetic disorder affecting just one in nearly 15,000 people.
“What happens is it affects the cartilage, the connective tissues throughout the body,” said FOX 29’s Medical Contributor Dr. Mike.

And it can cause life-altering pain.

“The tricky part of this disorder is the fact that you have a tremendous amount of joint problems. You can move your joints back. It can affect the vascular and that’s where you have the serious problems. You have dissection of the aorta, the big pipe in the body, leading to sudden death,” said Dr. Mike. 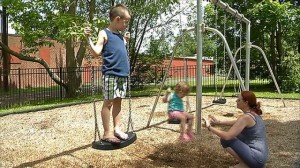 And if that wasn’t enough, the mother of two, also worries about her ability to care for her young children.

Megan tries to spend as much time as possible with them, but admits it’s sometimes tough because she’s always in pain. It also makes it painful for the 33-year-old to live her life’s passion, painting.

“I have nerve damage in my left arm, which I had for years. The muscles in my shoulder, doctors haven’t been able to figure out what the actual injury was in the first place, but that was part of it,” she said. In the past couple of months, I hurt my back repeatedly doing like minor things.”

There are several classifications of Ehlers- Danlos. Megan suffers from the hypermobility type.

“Doctors are skeptical and they think you are looking for pain medicine,” said Megan. “It’s hard because I have some days where I can hardly get out of the bed.”

“It really requires not only a specialist, like a rheumatologist, but also a geneticist because this is a genetic condition that can be passed on,” said Dr. Mike.

That means eventually Megan’s children will need to be tested for Ehlers-Danlos with the hope it won’t impact their lives as it has her.

“All I can do is explain it to people and hope that they understand,” said Megan.

Dr. Mike also suggests meditation as a way of helping people with chronic pain get their minds off their constant battle.”

Connect With Lucy Noland On Facebook  (News-Reporter for this Story)