Ruth Baker is telling her story to increase EDS Awareness in the UK.  She shares our passion – helping even one person makes it all worthwhile. Ruth says, “It can be a lonely place when you’re suffering from something that is so rare that even doctors don’t know what you’re talking about.” Doctors need to understand that EDS is perceived as a rare disorder only because it’s rarely detected and diagnosed. 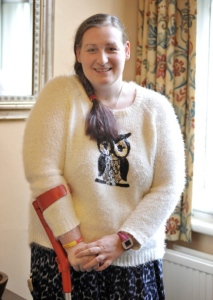 “A 29-year-old woman is sharing the story of her rare genetic condition in a bid to help local doctors understand the syndrome and make early diagnosis possible for other people.

Ruth Baker, of Sutton, was diagnosed with Ehlers-Danlos Syndrome two years ago after suffering years of unexplained joint dislocations, mostly in her knees, fingers and thumbs.

She said: “I had hyper-mobility and from the age of 11 my joints dislocated on a regular basis for no reason.

“I bruised easily and took forever to heal. Once I was simply standing in a car park and my knees dislocated.

“I’ve had three knee operations which have helped but I have been on crutches since I was 21. I’ve just got a wheelchair to make going out for the day easier as waking about can be really tiring.”

She was forced to give up her job in administration at East Cambridgegshire District Council six years ago after her third knee operation made going back to work too difficult.

Earlier this year, Ruth became the Cambridgeshire co-ordinator for the national charity Ehlers-Danlos Syndrome (EDS) UK, which supports people like herself.

She said: “It can be a lonely place when you’re suffering from something that is so rare that even doctors don’t know what you’re talking about.

“If my story can help just one person then it will have been worthwhile.

“I cannot recommend the national support group highly enough – connecting with others who have the same condition, getting advice and having the knowledge to go to your doctor with understanding has been invaluable.”

One in 5,000 people are diagnosed with Ehlers-Danlos Syndrome, a genetic condition, which affects the body’s collagen connective tissue – found in every part of your body including organs, eyes, skin and digestive system.

Ruth said: “Connective tissue covers more than 95 per cent of your body so there is little that escapes the symptoms.”

This week, Ruth received a cheque for £331 from Nellie’s Cafe in Sutton.

She said: “Money raised will help EDS UK in its work to support sufferers to live a full and active life as well as educate the medical community promoting treatment, management and improve accurate diagnosis.”

Support groups have been invaluable resource for Ruth.  Ehlers-Danlos Support UK is the group nearest to her. It is very active and does great work for its members.