Actress Gemma Christie is Back After Struggles with Ehlers Danlos

Gemma Christie is a popular UK singer/actress with 4 disorders, including Ehlers Danlos Syndrome. She is returning to the stage with the goal of bringing public awareness to invisible illnesses, such as EDS. This live performance called “Gemma Climbs Her Mountain” is about hope and rising above the illness. The play focuses on Myalgic Encephalopathy (ME), a disorder that is similar to Chronic Fatigue Syndrome. 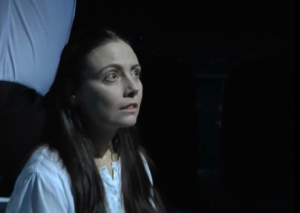 Gemma Christie in action in her play about M.E.

“A classical singer and actress who was forced to give up her performing career due to illness has returned to the stage for the first time in 10 years.

The conditions meant Gemma had to give up her performing career but this week she took to the stage at Media City in Salford.

The piece called Gemma Climbs Her Mountain and is about ME and aims to encourage debate around the condition. She said: “It’s been 10 years since I have been on stage. It was so special, it was such a great buzz. I was scared, but it all just came back to me. I have been performing since I was nine years old. I loved it.”

Gemma teamed up with BBC film producer/director Chris Salt for the performance about ME and living with chronic illness.

The project has been supported by the Arts Council.

Gemma said: “Originally I wanted to do a documentary about ME. I wanted to raise awareness of these issues. I thought I would put my skills to use. I never had any intention of performing.

“Chris had said he wanted to do something live and for the stage so I thought let’s go with it. We put in an application to the Arts Council for funding and we got funding for three months. We did a cross between a documentary and a play.”

The one night only show including Gemma singing and acting about her own and other people’s experiences of ME also includes footage from the interviews which had been carried out during the research.

She said: “The audience loved it. I wanted not just to tell my story but the stories of other people with ME. An ME sufferer said to me at the end ‘everything I wanted to say about ME is in the play’. That is the best compliment.”

The hope now is for the team involved to get more funding so more people can see the performance.

She added: “It was very moving. It is dark in places, but it has to be.”

“It is a story about hope and rising above the illness.”