Rare Disease Month brings out the images of those who are struggling with the challenges of Ehlers-Danlos Syndrome and other debilitating disorders. “Beyond the Diagnosis” is an art exhibit that features a piece depicting an EDSer and her caregiver. 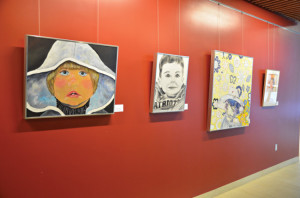 “Beyond the Diagnosis,” hosted for Rare Disease Month, aims to humanize portrayed patients”

“Heartwarming” and “intriguing” — those are the two words Kris Cambra, director of biomedical communications at the Alpert Medical School, used to describe “Beyond the Diagnosis,”  an exhibit commemorating Rare Disease Month.

The exhibit features portraits of 17 patients who suffer from rare diseases in order to spread awareness and appeal to politicians for funding for further research.

The Med School is the travelling exhibit’s first stop on a tour of medical schools in the United States, Cambra said. Its impact will continue to grow and build a new generation of doctors with a renewed compassion for patients.

“The 17 patient-focused paintings from “Beyond the Diagnosis” center on the humanity of individuals diagnosed with rare diseases. The exhibit will be displayed at the Alpert Medical School throughout February.

“The exhibit’s goal is to humanize patients with rare diseases,” Cambra said. “Here at the Alpert Medical School, the buzzword is patient-centered focus. Doctors always think of a patient as a person, not a diagnosis.”

Artist Tatiana Roulin looked to capture the concept of people-first thinking in a painting that portrays patients as people outside the doctor’s office. The piece depicts siblings Lucy, Oskar and Ava, who all remain undiagnosed to the viewer. The siblings sit on a bale of hay during a crisp autumn morning. A slight breeze blows by as the trees sway toward the left.

The painting incorporates the family dysfunction that arises in taking a picture, exemplified by squirming little kids. All three children look in different directions, as if there are multiple cameras snapping the photograph, recreating the restlessness of childhood. The soft harvest colors give the painting a certain lightheartedness despite the exhibit’s heavy subject matter.

Another painting by artist Ed Capeau features a young boy named Luke, who suffers from  a chromosomal abnormality and who seems to exude optimism. Unlike the painting of Lucy, Oskar and Ava, which is in color, the painting of Luke is  black and white. The lack of color dramatizes the sharp contrast between the young boy’s features and vivid expression, but the warmth of the painting comes through despite the stark color scheme. The combination of a twinkle sparkling in the boy’s eyes and his direct gaze at the viewer make him seem instantly lovable.

He is not just a patient with a rare disease, but also a little boy with certain vulnerability and dreams of his own, said Craig Eberson, associate professor of orthopedic surgery. “Each of the patients is an individual. There may be a different diagnosis, a different manifestation inside each one, but they all have desires, fears and dreams of the world.”

A simple black outline, created by Marissa Talbot, depicts an older woman named Ellen who suffers from Ehlers Danlos Syndrome. The work stands out in the exhibit of primarily young subjects in vibrant colors.

Ellen stands next to her husband, gazing towards their house. Though Ellen has a toothy grin spread upon her face, her husband is overcome by grief. His head is bent down and the creases around his mouth and eyes suggest immense hardship, reminding the viewer to consider the perspective of a patient’s loved ones.

“To be a good physician, you need to be broadly, liberally educated,” Cambra said. “With a liberal education, you can understand what people are going through, what patients are going through.”

Doctors need to handle each patient differently, Eberson said. There is no singular universal healing­ — patients have diverse responses to treatments. Like the title “Beyond the Diagnosis” suggests, this exhibit reminds medical students that patients are people rather than diseases and merit individualized treatment, he added.”

Simple but distinctive artwork depicts the challenges for those with “rare” diseases like  Ehlers-Danlos Sydrome.