September is “Pain Awareness Month” in Scituate, RI and several other U.S. towns. Advocates are raising awareness of  chronic pain conditions and the U.S. Pain Foundation.

Stuart and Ellen Lenox Smith have been very active with the U.S. Pain Foundation and EDS Awareness for Ehlers-Danlos Syndrome. Their “Pain Awareness Event” at Miriam Hospital in Providence on Saturday, Sept. 27th will conclude this month’s activities. 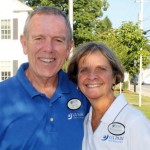 Stuart and Ellen Smith are decking Scituate with blue and white ribbons to raise awareness of the U.S. Pain Foundation and other programs to help people living in constant pain. (Valley Breeze & Observer photo by Denise Perreault)

SCITUATE – “People who live with pain all of the time, day in and day out, can find help and support, say a Scituate couple that is spreading the word about “Pain Awareness Month” with ribbons and signs around town in September.

Stuart and Ellen Lenox Smith, 30-year residents of the town who live on Ide Road, won permission from the Town Council at its last meeting, Aug. 27, to place blue ribbons and signs throughout Scituate to raise awareness of the U.S. Pain Foundation. Ribbons and signs are emblazoned with the pain foundation’s name, logo and web site address, uspainfoundation.org .

Ellen, who suffers from Ehlers-Danlos Syndrome and has undergone 22 surgeries, explained that the blue ribbon campaign is a pilot project for the U.S. Pain Foundation, and Scituate is one of several towns in the nation chosen to try it out.

“We want to help spread awareness,” Ellen said, noting that people in constant pain often are reluctant to talk about it and to seek help for fear they will be perceived as weak by others. But if you do treat it, Ellen says, “you can get back your quality of life.”

The month will end with a “Pain Awareness Event” at Miriam Hospital in Providence on Saturday, Sept. 27, from 2 to 5 p.m., a free event organized by Ellen with limited seating for 100 people, first come will be first seated. No registration is required.

Ellen and Stuart come to this campaign with a great deal of experience in pain and pain treatment. Both are board members of the U.S. Pain Foundation, based in Middletown, Conn., and Stu is director of caregivers for the group. Both also co-direct the foundation’s medical marijuana advocacy program, and are on the board of the Rhode Island Patient Advocacy Coalition, with Stu as vice president.

Since its 2006-07 enactment, “Our ultimate goal is to change, not just the public culture, but the medical culture,” Stu said. “Doctors do not get trained in pain and they don’t treat pain. We want to see pain treated as a separate disease, with its own side effects and its own ramifications, such as depression, ulcers, and anxiety.

Stu and Ellen were slated to receive 150 feet of blue and white ribbon from the U.S. Pain Foundation to bedeck the town this month. Interviewed before the ribbon arrived, they weren’t sure exactly how many ribbons that amount will produce – at least 100, they figure – and starting Sept. 1 they plan to tie the ribbons around poles and trees in those areas where “people will walk by and see them,” Ellen said. “We’re going to put up as many as we can, until we run out.”

Two signs also would be erected, one in front of Town Hall and another in the area of Route 116. Free brochures and other information about the U.S. Pain Foundation will be available at Town Hall.

Ellen, 64, was diagnosed a decade ago with EDS, a progressive degenerative connective tissue disorder, whose effects she felt since childhood without knowing what it was. The disease is marked by joint hypermobility, skin extensibility and tissue fragility, according to Pain Pathways magazine.

As the connective tissue in her joints deteriorated, she has become extra-sensitive to routine touching, as even a hug or a bump can dislodge her joints. Previously, she spent four years in a wheelchair. Stu also has constant pain from chronic back problems.

Ellen has received what she considers life-saving help from her service dog Maggie, a gentle 6-year-old black lab, and from the use of marijuana oil in place of stronger drugs.

“This gave me my life back,” she says of marijuana, which has helped her sleep, eat and live without pain.

She and Stu have addressed various groups about pain, including Brown University medical school students, physical therapists and R.I. Blue Cross nurses. They also are the parents of four grown sons.

At the Miriam Hospital event, Paul Gileno, a pain-sufferer himself who founded the U.S. Pain Foundation, will present welcome remarks. Guest speaker will be Dr. Stephen B. Corn, a Boston physician and Harvard Medical School professor, will talk about “Advances in Medical Marijuana Education.”

Other speakers include Brittany Desjardin, a Cumberland High School graduate afflicted with EDS who is studying for her doctor in pharmacy degree at New England College in Henniker, N.H., and JoAnne Leppanen of RIPAC.

Estimates on the number of adult Americans afflicted with constant pain, according to various national studies, range from 75 million to 116 million, with the latter figure more than the number of people suffering from heart disease, cancer and diabetes combined. U.S. Pain Foundation is a 501 (c) 3 organization with a presence on Twitter and Facebook as well as the Internet.”