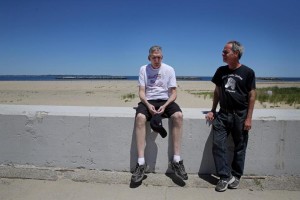 Jonathan Rodis takes his hydrocodone pills sparingly, only when the pain becomes unbearable. He doesn’t like the way the drug fogs his brain. And lately, he also needs to conserve — because new federal rules make it hard to get a refill.

Rodis has Marfan syndrome, a genetic condition that affects connective tissue and makes his whole body hurt. The pills dull the pain for a few hours. But now, instead of just calling his pharmacy when he needs a refill, he has to make the 30- to 45-minute trek from Winthrop into Boston to see his doctor, a major undertaking for a man who can barely leave the house on bad days.

“I feel so trapped when I look at my bottle and see six pills left,” said Rodis, who is 57.

This is the other side of America’s war on opioids.

As federal and state regulators rush to curtail access to drugs that have claimed thousands of lives, the rules they’ve enacted fall hard on people who legitimately need relief from pain. In an atmosphere of heightened concern about opioids, patients in pain face reluctant doctors, wary pharmacists, and the frequent demand to prove that they are not addicts.

President-Massachusetts Chapter of The Marfan Foundation