Kaleena Deshawn on challenges as a person of color with EDS, Fibromyalgia and ME/CFS 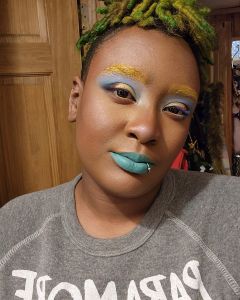 For our July newsletter, the Chronic Pain Partners media team interviewed a group of people to highlight the diversity of our community and emphasize the challenges that arise when a person belongs to more than one minority. In this interview, journalist Jackie Saa speaks with Kaleena Deshawn, a Boston-based intermedia artist, makeup enthusiast, and zebra warrior who lives with hEDS, Fibromyalgia and ME/CFS. Deshawn talks about the challenges she faces as a woman of color with several chronic illnesses, her experiences within the community, her top tips to improve the quality of life as a Black woman with a rare connective tissue disorder, and her passion for makeup.

Hi Kaleena, I am so glad to talk to you today. Thanks so much for agreeing to this interview. Can you tell me how being Black has affected your EDS journey?

When my sister and I were trying to get a diagnosis, we learned more about EDS by seeking out the advice of support groups. Initially, going into those, it was a very white space, and there was this notion that black people wouldn’t have EDS because it’s a European disease. If my doctor gives me this diagnosis, it’s weird to have some random lady tell me otherwise. Trying to get a diagnosis or figuring out what’s going on is already hard enough, but then to go into a space where people are supposed to support you, but instead, you get more people denying your experience, that doesn’t feel good. It’s unsettling. It’s the opposite of what a support group is supposed to do.

I can relate to all you just said, being Latina and having EDS. What do you wish more health care providers knew about their EDS patients?

I wish they understood chronic pain more. It seems like you’ll get a diagnosis, and then for many doctors, that’s the extent of their support. The care stops after the diagnosis. They don’t treat their patients for their day-to-day symptoms. It’s like, “Oh, yeah, you have that, and it probably hurts, but that’s normal.” Yes, you want to know why certain things are happening to your body, but beyond that, when I’m going to the doctor, I want to be treated. I want there to be some level of care. I feel like with EDS and many of my comorbidities, it’s been a lot more of me personally learning about what I’m going through and what will be helpful instead of doctors having suggestions to help my day-to-day life and functionality.

I hear that you’ve done a lot of research on your own to better help yourself. I do that as well! What would be your top three tips to help other zebras?

First of all, make sure that you’re advocating for yourself because, as I said, there’s going to be a lot of doctors, nurses, just people you come across that have very little to no idea of what EDS is. They’re going to downplay whatever you’re explaining to them, or they won’t understand. It’s essential in taking care of yourself that you don’t let them silence you or belittle what it is that you’re trying to explain to them because whether they mean it, whether it’s intentional or with malice, it’s going to happen. If you roll over, you’re never going to get the help you need.

I advocate for finding a group of zebras you can relate to and speak with. I know I’ve already mentioned those support groups, and those were not that space for me. I stumbled upon a group of not just EDS zebras but of chronic illness sufferers. Once I had started my Instagram, I came across a very large group of people that live with some chronic illness. Even though the space was created on my Instagram initially for sharing makeup tips, chronic illness is such a large part of your life when you have it that it leads its way into all those conversations. In doing so, I was able to find that group of people and the support I needed.

If you search for that support and don’t initially find it in one place, that does not mean that it doesn’t exist or that you can’t find it elsewhere. One of the most important things that I’ve learned myself through making mistakes is to listen to your body. It can be very easy to fall into a trap, or somebody’s telling you that you must keep pushing, but taking care of your body is not laziness. And if you don’t take care of your body, you’re going to burn yourself out and make things a million times worse.

There are going to be times – whether it’s spending time with your family or doing certain things – where you’re going to push yourself a little more than your body would like, and that comes with recovery time, and it’ll be worth it. But there are many things that seem essential in the moment, and you just keep wearing yourself down trying to do them, and those are not worth it.

I totally agree with you. Do you ever find yourself having difficulty saying no to people or turning down invitations?

It’s tough. There will be some dark times in getting to a place where you’re comfortable saying, “I’m not able to do that.” Finding that group of people who relate and understand is helpful. In terms of saying no, there’s also the component of once you’ve said no enough times, people in your life will stop asking, and you have to find a way to be okay with that. Some people will get frustrated with you. But you are not doing anything wrong. You are sick. If those people can’t see that or are not trying to understand, that’s not your fault.

Is this the reason why you developed this passion for doing makeup, or did you have that the whole time?

In high school, I liked eyeshadow and eyeliner, but my interest in makeup had never really gone past that before. I was still doing little things here and there in art school, but my focus was very much on my artwork. I enjoyed makeup, but I wasn’t putting any real focus or thought into it. Around four years ago, my sister was planning her 30th birthday party, and I dressed up because it was formal. I was obsessed with finding this glittery purple lipstick for my outfit, and I ended up watching a lot of makeup YouTube tutorials in that search. I think that’s when I started going into makeup.

It was pretty helpful as a coping strategy as well because that was around the time I started to get a little burnt out when I had to stop working. Until then, I had still been making art regularly, painting and printmaking and artsy things like that. It got to the point where it was a lot for me because this art is process-based and messy. Besides doing the actual work, there’s prep, there’s cleanup, there are all these things that got hard for me.

It was nice to have a creative outlet where I still felt like I could play around and do things that I enjoyed even when I wasn’t feeling well enough to do my art. I noticed with listening to my body and giving myself all the bed rest that I needed, there are times when, mind-wise, I’m just restless. So having something to focus on that doesn’t take a ton of my energy or my spoons is really helpful, even if it’s something as trivial as concentrating on that one lipstick. It’s exciting in a way that might not make sense to many people, but it feels like you have something to do again. You’re giving yourself something to do even when you’re stuck in bed. It’s powerful. It’s meaningful. It’s vital in terms of coping mechanisms and keeping yourself going. When you’re sick, it’s easy to fall into a place where you’re sad because everything’s different and everything’s hard and not the way that you plan for your life to be going, especially in adulthood. But being able to have something to focus on, no matter what it is, no matter how little it may seem, keeps you going.

Thank you for your time, Kaleena. It was great meeting you today.

Thank you for reaching out!