Jeff with EDS – “I Just Need to Give my Crazy Movie a Good Ending.”

Jeff Hanson has EDS and while struggling with it he is determined to stay strong and make the best of this situation. 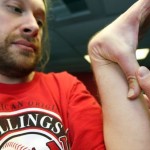 “Jeff Hansen has Ehlers-Danlos syndrome, a rare connective tissue disorder with symptoms that include extreme flexibility.

In mid-November, Jeff Hansen knew he’d reached an important milestone. He got the hiccups.

He hadn’t had them for more than 12 years, ever since his abdominal muscles were severed during cancer surgery, and he was thrilled.

The hiccups came because he had been working out for weeks, hard. Plagued for most of his 39 years with a bewildering variety of diseases and ailments, he learned last summer what his underlying condition was.

The long-delayed diagnosis gave him hope that he could finally manage his many medical problems. Determined to get healthy, he signed up for the LiveStrong program for cancer survivors at the Billings Family YMCA. A week before graduating from the program in mid-December, Hansen said LiveStrong inspired him to get involved in other exercise activities.

“I’m up to 13 classes a week, and only two of those are LiveStrong,” he said. “Anything I do at the Y is a lot easier than cancer treatment.”

The last time The Gazette caught up with Hansen was in 2004. A story published on Feb. 7 of that year told how Hansen spent one day a week playing music — on a four-stringed instrument called a mountain dulcimer — for oncology patients at St. Vincent Healthcare.

He stopped playing music three years later, after the Food and Drug Administration pulled from the market a drug that he was using to deal with an inoperable brain tumor.

About the same time, there was a shortage of the hormone replacement medication he was taking for his very low levels of testosterone. That “one-two punch,” Hansen said, compounded by fatigue, severe back pain and fainting spells, rendered him virtually bedridden for three years.

By early 2011, Hansen, who stands 6 feet, 8 inches, weighed 315 pounds. He forced himself to get active and eventually lost 70 pounds, but when he tried to find a medication that would treat his fainting problems, there were more troubles.

Rather than listening to Hansen about which medications had been successful in the past, his doctor prescribed several other drugs, one of which caused him to suffer a stroke in 2012.

“This is when I fired my doctor and came to realize that I needed to take full responsibility for my own health and become my own advocate,” he said.

The result, he said, is that he has made more progress in the past 20 months than he had in the previous 20 years, and he is beginning to believe that he might one day be able to live a life that he could describe as “normal.”

The big breakthrough occurred in August, when Dr. Douglas Roane, a rheumatologist in Billings, finally determined that a rare connective tissue disorder, Ehlers-Danlos syndrome, was at the root of many of Hansen’s medical problems.

Hansen suffers from he called a “cruel combination” of disorders and maladies.

Besides the brain tumor and fainting problems, he has had testicular cancer, migraines, aching joints, jaw disorders resulting in “somewhat painful tinnitus,” mild scoliosis, blood-circulation problems and pronounced sleep disorders. He also has acromegaly, a condition in which the anterior pituitary gland produces excess growth hormone.

“That’s what killed Andre the Giant,” Hansen said. “He had it a lot more severe than I did.”

How could one person suffer so many Job-like afflictions? It has never been proven conclusively, but Hansen says it’s hard to imagine that his medical problems are not related to work his father did in the 1970s.

His father, Jim Hansen, was employed as a biologist at a wildlife laboratory in southeast Missouri in the early 1970s. One of his colleagues was doing research on the toxicity of dieldrin, a pesticide that Jeff Hansen said was much more toxic than DDT.

The research eventually led to a ban on dieldrin, but the project apparently had devastating effects on people who worked at the laboratory. There were high rates of lymphoma and other cancers among people who worked there, Hansen said, and the man who ran the tests had one child with multiple birth defects, and another with endocrine problems.

Hansen said his father had lymphoma, prostate and colon cancer, while Hansen and his sister both had acromegaly. He said a specialist determined that the identical rare disease he and his sister had was not hereditary.

“The staggering odds it would take for someone to amass my specific collection of rare disorders is so ridiculous that the epigenetic involvement of dieldrin is the only logical explanation,” he said.

Hansen made that comment in an email. Earlier, less technically but more passionately, he said: “If you look at all this crap and multiply it out, I’m probably the only person in the world with this combination of stuff.”

He doesn’t entirely blame the doctors he had earlier in life. He realizes now how many of his symptoms pointed toward Ehlers-Danlos syndrome, but it is so rare that few doctors have dealt with it.

He is still disappointed, though, that none of his doctors found anything extraordinary about his hypermobility — extreme flexibility as a result of his connective tissue disorder.

It was a much different experience when Hansen began taking yoga classes. His instructors were amazed at his flexibility. Since childhood he’d been sitting in odd positions just to relax — poses he now knew were usually reserved for advanced yoga practitioners.

If all the clues had been deciphered years earlier, he could have avoided a lot of trouble with various medications, and he never would have allowed himself to be bedridden, because inactivity only makes things worse for people with Ehlers-Danlos syndrome.

Hansen admits he is “stubborn, or unrealistically optimistic,” but he wants to tell other people how important it is not to give up.

“I’ve had to fight doctors, fight the FDA, fight drug distributors, fight insurers,” he said. “Especially with complicated stuff, you really have to be an advocate and really educate yourself.”

YMCA Wellness Coordinator Kassia Lyman, who leads the LiveStrong program, told Hansen at a graduation ceremony last week that “it doesn’t matter what obstacles you have, you’re going to push through it.”

In an earlier interview, Lyman said Hansen is so motivated that she occasionally has to advise him to back off.

“I do have to remind Jeff that he needs to listen to his body,” she said.

Lately, his body is telling him to go the Y early, stay late and work hard. Among other benefits of exercise, he learned that more muscle would stabilize his joints, and stronger legs would reduce the severity of his fainting.

The LiveStrong program is free to participants, who also get a discounted membership for a year following graduation.”

Hansen called it the best gift he ever received, and he’s determined to make the best of it.

“What I’ve been through — it’s almost like some movie script,” he said. “I just need to give my crazy movie a good ending.”

“Jeff is a very courageous man who is learning more about dealing with the Ehlers-Danlos Syndrome disorder.”