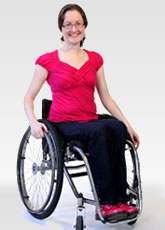 Hannah spreads EDS awareness through her creative cartoons. Her Stickman booklets and information cards have enlightened and entertained many readers.
They have provided an alternative way for EDSers to express their needs.

“Hannah was diagnosed with HMS aged 24, having been symptomatic all her life. She did well in school and university, but a year after starting work as an Environmental Health Officer her symptoms reached a disabling level and her Postural Orthostatic Tachycardia (POTS) became severe.

After working part time and flexible hours for a while she was medically retired in 2010 – age 28. By this point, while in hospital and unable to put a sentence together, she had discovered a talent for stickman cartoons. What started out as a way to tell others about her condition in a fun and stylish way naturally grew into a business – communicating about disability with charm, humour, and unerring accuracy.

And so ‘Stickman Communications’ was born – and Hannah officially became an author and illustrator. Light hearted and useful products, all aimed at communicating about awkward/difficult things. From booklets explaining HMS to keyring cards saying ‘Warning: High pain levels. Excessive Grumping Likely’. From car stickers to children’s picture books. Many of her products raise money for the HMSA – and many are useful to people with HMS. In addition to the awareness raising work of her products, Hannah is increasingly in demand at events, disability fairs, book signings, and schools, as well as, of course, the HMSA residential conferences  – working to create a better future for all.

A combination of physiotherapy, learning to control her movements, pacing, medication, respecting her limits, pushing her boundaries, making the most of everything and generally choosing to focus on the positives means that she lives a full and happy life. So what if she uses wheels to get out and about, rests frequently and owns enough supports to create an entire exoskeleton?

Although proud of her stickman empire, Hannah thinks her greatest achievements have been in learning to manage her HMS/EDS and POTS and keeping up with her physio regime. It is an on going learning process, but has made so much difference to her life. Having said that, her proudest day has to be 26th April 2012.

The day she was officially appointed HMSA Patron for Kids and Teens.”

Hannah must be very proud of her accomplishments!