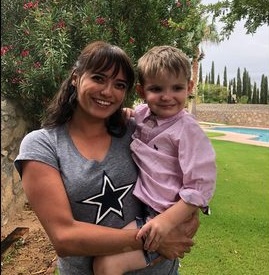 Bella Marin and Ryan Dolliver take a picture together. The two are diagnosed with Vascular Ehlers-Danlos Syndrome, a rare disorder that affects the connective tissues and leaves organs susceptible to rupture, leading to death. Photo by Kyle Dolliver.

EL PASO, Texas – Ryan Dolliver is like most 3-year-old boys.  He loves to play with his sister, laugh, destroy things and he can be mischievous. Ryan has a great smile, and when he laughs it is infectious. He has no clue he is living with a condition that could end his life at any time, without warning.

Ryan was diagnosed with Vascular Ehlers-Danlos Syndrome (VEDS), which affects the body’s connective tissue.   His body lacks collagen, and any organ could rupture at any time.  There is no cure, research is minimal and there is no treatment at this point.  Ryan’s father, Kyle Dolliver, says he and his wife took the diagnosis hard.  After about a month of depression, they decided they had to take action.

Kyle and his mother-in-law spent hours on the phone one night, devising a plan to raise money for research to find a cure.  Three weeks later, they had their nonprofit, Ryan’s Challenge, up and running.

“We want to get in the Guinness Book of World Records for the most selfies with media personalities and talk show hosts,” Ryan’s dad, Kyle, said. “We even hope to get a few celebrities in along the way.”

Only about 200,000 people in the U.S. are living with this diagnosis.  ABC-7 profiled a woman in El Paso who is living with VEDS, Bella Marin, when she graduated from UTEP in 2016.

The rarity of the disorder brings families across the globe who are living with it together during annual conferences. The Marin family encouraged the Dollivers to come to El Paso, and met up with them during their visit to the Sun City.