Chronically in Pain and in Love – POTS and Ehlers-Danlos Syndrome

The diagnosis was bittersweet. It was good to finally have an answer …. Ehlers-Danlos Syndrome! 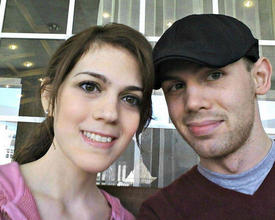 “For most of her life, she had struggled with a lack of energy. She couldn’t keep up with her peers in middle school gym class and tried to work with a teacher who didn’t understand her and thought she was lazy.

Feeling dizzy and with heart pounding, she was too weak to run with the rest of her classmates. As she grew older, she knew something wasn’t right, but doctors could never find anything wrong and told her she was fine.

In 2005, at age 19, at a Hanson concert in Oklahoma with her niece, she collapsed. Sounds got muffled, her vision grayed and she thought she was dying, she said. On the way to the hospital, she went in and out of consciousness, but when she got there, doctors said she was OK.

That summer, her symptoms returned. She lost the ability to walk without fainting and was so weak she couldn’t pick up a fork to eat. She was tested for everything, she said, but, again, nothing was found.

Finally, she searched her symptoms online and found a support group.

Her dad called a contact person and the woman referred them to a doctor in Virginia. There she was diagnosed with postural orthostatic tachycardia syndrome, a condition that returns a reduced amount of blood to the heart when standing up from lying down.

It causes dizziness, exhaustion, fainting and is often accompanied by a rapid heart rate. There is no cure, according to the National Institute of Neurological Disorders and Stroke.

The diagnosis was bittersweet. It was good to finally have an answer for her symptoms, but Wolfson knew life was going to be tough from then on, she said. One of her first instincts was to reach out to others who had the same condition.”

“After the diagnosis, I didn’t know many people with the condition,” she said. “I knew there had to be people out there [like me] who were suffering, alone and didn’t have support, and it was a natural thing to want to help them and reach out.”

In early 2010, she and a few of her friends decided to start an online support group for people having trouble getting diagnosed and finding doctors who could treat them. The Dysautonomia Connection was born and became a place where people could get to know one another and create friendships.

Dysautonomia describes a group of chronic conditions associated with the failure of the autonomic nervous system, which controls functions such as heart rate, blood pressure, respiration and digestion. People with dysautonomia can have irregular blood pressure, heart problems and trouble breathing and swallowing, among other symptoms, according to the U.S. National Library of Medicine and the National Institutes of Health.

After several months, the founders and staff of The Dysautonomia Connection decided to get together in Jacksonville, Fla., to meet face-to-face for the first time.

“It was exciting. It was people I’d been talking to for years,” Wolfson said. “It was a magical and amazing trip.”

She had dated here and there, but, post-diagnosis, found herself feeling discouraged and cynical that anyone could deal with her health issues.

When she went to Florida she wasn’t looking for love, but there it was, in the form of a young man from South Charleston.

Wolfson and Dustin Wood, then 24, had talked online a few times before the trip, but both were shocked at the instant connection they felt when they met for the first time.

“It was love at first sight,” Wood said. “I felt like I just met somebody I couldn’t live without.”

He didn’t waste any time in deciding he wanted to ask her out and rehearsed how he was going to do it. The conversation didn’t get far, though, as Wolfson interrupted him to tell him she felt the same way.

“He was so nervous he was shaking,” she said. “I saw where he was going and I just said, ‘Yes.'” She said she’ll never forget his face, how his jaw dropped — he was so shocked.

“We instantly connected. It was like I knew him my whole life,” she said. “It was funny with him — he was just familiar. We’d been through so many similar things and fought the same battle with our health. We had this connection because of that.”

Wolfson and Wood share POTS as well as an associated condition called Ehlers-Danlos syndrome. EDS breaks down collagen, a substance that provides structure and strength to connective tissues in the body; the collagen breakdown leads to weak joints, according to the U.S. National Library of Medicine.

Something as simple as opening a refrigerator door can dislocate a wrist, Wood said.

He also has epileptic seizures, and chiari malformation, a condition where the skull is too small or misshapen and presses down on the brain, extending brain tissue into the spinal cord. It causes symptoms such as numbness, dizziness, weakness and problems breathing.

“We tell each other we’re chronically in love,” Wood said.

In sickness and in health

They moved into an apartment near the Mayo Clinic, in Minnesota, to be close to good health care. Daily life could be a struggle.

Wolfson usually feels a warning before she faints, but Wood can faint at any time, unexpectedly. During trips to the grocery store, they might have to sit down and take a break to regain energy. At home, they stay organized because a lot of energy can be wasted looking for belongings.

Mostly they deal with their conditions by making lifestyle changes instead of taking medication. Wood hasn’t been on any medicine since one of them gave him a stroke, and Wolfson only does so every once in a while, when her symptoms are worse than normal, she said.

Both said their conditions may test their physical limits every day, but it also nurtures a deeper love for one another.

“He never complains or made me feel he was frustrated,” Wolfson said. “There’s a deep emotional connection that wouldn’t be there otherwise. All the struggles have brought us closer.”

Sometimes, when Wood has seizures or faints he can be out for several minutes, Wolfson said.

“I’ve always told him that during that amount of time, it’s like every light in the world goes out for me. I feel like because I ‘lose’ him at random moments like that, I’m constantly reminded of his amazing presence in my life. I can’t ever take him for granted because in those moments, I feel what it’s like to not have him there. And then of course, he wakes up and everything is OK, and it’s like a reason to celebrate.”

Ehlers-Danlos Syndrome, POTs and chiari malformation have brought this couple together to support one another through their daily struggles.