Chronic Pain from Ehlers-Danlos Syndrome Leads to a Drastic Decision

Elisha Morgan’s 8-year long struggle with severe foot pain lead to an Ehlers-Danlos diagnosis that changed her life. Her doctor agreed that she had exhausted all treatment options. Now, she had to consider making a very difficult decision … whether to amputate her foot! 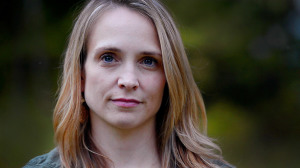 The chronic pain that Elisha Morgan has felt in her feet for years – “like knives,” she says – has led her to a succession of doctors and diagnoses. At long last, the 35-year-old Gorham resident learned that she has Ehlers-Danlos syndrome, an inherited disorder marked by extremely loose joints; unfortunately, it has no cure. She says she finally came to realize it would be up to her to find relief. Shawn Patrick Ouellette/Staff Photographer

“The first time Elisha Morgan felt as if someone had taken a razor blade and shredded her feet was after a shift at Panera Bread in South Portland, where she worked while going to school at the University of Southern Maine. “It felt like knives in my feet,” she recalled, 11 years later. “Like I was walking on my bones.” Morgan, now 35, went on to graduate from college, marry her Panera co-worker and move into a townhouse in Westbrook. She got a job at Idexx Laboratories and gave birth to two daughters. The older one, Eleanor, started first grade this fall.

But through it all, every time she spent more than a few minutes on her feet, the same searing pain came back.

The chronic pain that Elisha Morgan has felt in her feet for years – “like knives,” she says – has led her to a succession of doctors and diagnoses. At long last, the 35-year-old Gorham resident learned that she has Ehlers-Danlos syndrome, an inherited disorder marked by extremely loose joints; unfortunately, it has no cure. She says she finally came to realize it would be up to her to find relief.

She stood and walked as little as possible. When she had to do more, she paid for it later. Other than that, nothing helped – not orthotics, nerve blocks or shockwave therapy.

She tried medication, but the amount she needed to get relief put her to sleep.

She thought about using a wheelchair, but that would keep her from playing freely with her daughters in the park or dancing with her husband at weddings – the things her pain prevented her from doing that, when she thought about them, could make her cry.

She had four unsuccessful surgeries before deciding there was just one that would allow her to have the life she wanted.

Her only option, she felt, was to amputate.

Amputation is an uncommon but not unheard-of treatment for chronic pain. In most cases, the limbs are injured or diseased and can’t function properly. Rarely, as in the case of Morgan’s feet, do they look completely normal.

But as unusual as her decision is, her situation is not. More than 100 million Americans, nearly a third of the population, suffer from chronic pain, many of them desperate to find a way to get their lives back.

Although there’s no data on the number of people in Maine with chronic pain, they make up most of the 300 referrals that the Mercy Pain Center in Portland receives every month from patients who haven’t responded to conventional treatment.

The effect of the widespread problem goes beyond the lives of patients. It’s costing the country $560 billion to $635 billion annually in health care and lost productivity, according to a 2011 Institute of Medicine report.

Despite its prevalence, chronic pain is something doctors and scientists still don’t know a lot about. Unlike acute pain, which warns people that their bodies are being harmed, chronic pain seems to serve no purpose.

It can show up after an injury or surgery, accompany a condition like cancer or diabetes or appear on its own, with no detectable underlying cause. Although managing chronic pain is part of most medical professions, for a long time it was the focus of none, keeping many patients, especially those without a diagnosis, from getting help.

People suffering from chronic pain often feel hopeless about their condition improving, which alone can make it worse. According to a report by the Institute of Medicine, chronic pain can “exacerbate depression, produce fatigue, hamper functions and diminish quality of life.”

For some, those symptoms can lead to further complications, including divorce, addiction and suicide. In rare occasions, however, enduring unending pain can have the opposite effect, the report said, leading “to the development of unexpected personal strengths and an astonishing capacity to prevail.”

When Morgan got to the point where she felt like no one could help her, she realized it would be up to her to find relief.

Morgan always preferred to do things on her own, said her father, Dan Jack, who recalled how she’d balk at her parents trying to help her put on her coat as a child.

She was tiny, but tough, Jack said of his middle daughter, the most reserved of his three girls.

Morgan grew up in Buckfield, where her father’s family goes back centuries. Her mother grew up in Canada, but moved to Buckfield in high school. She and Jack, the king and queen of their prom, have been together ever since.

As kids, Morgan and her sisters were all in 4-H, raised steers and showed them at agricultural fairs. They also all played softball at Buckfield High, where their father, a forester by trade, was the coach.

But Morgan’s gift was in gymnastics. She was the most flexible member of her travel team and could have gone far, her father said, but decided to switch to cheering when she got older.

Aside from the few times she skipped school with her friends, Morgan was a good kid who never complained, her father said. Pretty and popular, she was voted prom queen, just like her mother.

After high school, she moved into the dorms on USM’s Gorham campus, where she started out studying biology, before switching to environmental science.

She imagined she’d move to Boston after college, maybe go to medical school or into the Peace Corps, but it was in her last year of school that the unbearable pain began, and she decided to stick close to home.

Without health insurance, she endured the burning pain in her feet for four months before going to see a doctor, who told Morgan her ligaments were too tight. The treatment prescribed was to stretch.

So she did, sometimes up to seven times a day. A month later, nothing had changed, nor did it after she had cortisone injections and nerve blocks in her spine.

Four times, Morgan had shockwaves tear up the tissue in her feet for the purpose of promoting healing, but only rendering her immobile for weeks.

Morgan spent eight years without a diagnosis for her pain, which got her thinking, she might be crazy.

For a while she thought she might just try to live with the pain, pretend it wasn’t there, but there were always reminders, enough that it put a strain on her marriage.

“It was something that almost kind of hovered over us,” said her husband, John Morgan, a teacher at Westbrook High School.

He had to handle a lot of the chores, like grocery shopping and vacuuming, so she could stay off her feet. Wherever they went, they were always searching for the closest parking spot.

She couldn’t take walks with her family and, when they brought the girls to the park, it was never long before she was looking for a bench.

“As a parent, you’re supposed to be bringing everyone forward and I was always the one holding everyone back,” she said.

It was hard on her self-esteem, too. At weddings or parties, she couldn’t socialize because she had to sit. If colleagues started a conversation as she was coming back from the bathroom, she’d have to cut them off so she could get back to her desk. She was afraid people thought she was rude.

Morgan said she would have had 50 surgeries if she thought there was a chance they might make a difference.

As it was, she had doctors cut ligaments in the bottom of her feet and tendons in her calves to make them longer. That was before finding out that her problem was the opposite of what they were trying to treat. Her joints were too loose.

Morgan didn’t think much of being diagnosed with Ehlers-Danlos syndrome. Doctors had told her what was wrong many times before and had never been right.

But as she read more about the rare genetic condition, in which a lack of collagen results in hyper-flexible joints, the symptoms aligned with her experiences – and not just the pain in her feet, but traits she never took as signs of something wrong.

It was in the snakelike motion she could make with her hands pressed together – a trick she would show off to her friends growing up.

It was in the kneecap she dislocated at the beach in junior high, then a dozen times after.

It was in the flexibility she displayed in gymnastics and as the flier for her high school cheerleading squad and in the ease with which she ran 30 miles a week, a habit that put undue stress on the joints in her feet so that, by 24 years old, she’d worn them out.

Although Ehlers- Danlos Syndrome gave Morgan the reassurance the pain wasn’t all in her head, the diagnosis came with another reality: There was no cure.

For a while, she simply limited her activity. She’d calculate every minute spent on her feet, forgoing a chore in favor of going to the bathroom.

“You have to sacrifice to do the basics,” she said, knowing that every extra minute walking would mean more pain later.

She tried using braces on her lower legs, but they gave her an uneven gait and didn’t relieve pressure from her feet. At home, she wore air casts that came up to her knees, like moon boots, she said. She was too embarrassed to answer the door in them, let alone leave the house.

She and her husband had talked about amputation. His biggest concern was that she’d have phantom pain – a phenomenon in which the limb continues to hurt after it’s amputated.

If her foot was gone and the pain was still there, any added limitations would become her husband’s responsibilities to bear.

“The risk to him is the biggest of anybody,” she said.

In researching the option online, she found a blog by a man named Richard Blalock, a 61-year-old runner from South Carolina sidelined by arthritis who decided to amputate his foot, so he could get a prosthetic and race again. Less than two years after his surgery, he was back to running marathons with no regrets.

“I was so happy,” she said about finding his story. She made her husband read it, too. It wasn’t long after that she told him, over Thai food before a movie, she had made her decision. They both knew that was it.”

Ehlers-Danlos syndrome can have a life-changing impact on the person affected and their family!  To find out what Elisha’s decision was… read Part 2 of this article.