Bruising Can Be a Manifestation of Ehlers-Danlos Syndrome

Ehlers-Danlos Syndrome patients may be sensitive to bruising due to fragile capillaries and blood vessels surrounding the connective tissues. This story tells more about this symptom. 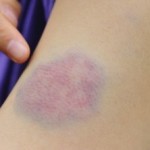 “Mysterious bruises have been appearing on my legs for a while now, mostly on my thighs, but also on my calves. Sometimes they appear and I can not figure out how I got them. I know I am not that clumsy, and they appear sometimes in strange places where bruises do not usually appear. I have always bruised fairly easily, but the bruising has become more excessive and constant in the past several months,’ complains Kate in one of the health forums.

Do you bruise in places that you don’t even remember bumping or hurting, and the bruise doesn’t go away for months together? More importantly, do you bruise all the time?

Bruises are caused when blood vessels are damaged or broken as a result of injury to the skin.  Blood leaks from these injured blood vessels into the tissues resulting in a bruise. It is the body’s response to the injury. Medically termed as contusion, constant bruising could mean a lot of things ranging from ageing to nutritional deficiency and medications to serious conditions like hemophilia and cancer.

Let’s look at some of them:

Constant bruising at the back of the hands and arms is common in older adults. These bruises, known as actinic purpura, may start with red flat blotches, then turn purple, deepen and gradually fade away. This type of bruising occurs because the blood vessel walls become weak from many years of sun exposure. Aspirin, coumadin, alcohol, all of these worsen the condition. (Read: Interesting facts about ageing)

Constant bruising can be a result of nutritional deficiency. For example, vitamin K helps blood to clot and is an essential component of bone structure, so deficiency of this vitamin affects normal blood clotting, thus causing bruising. Similarly, vitamin C is essential for synthesis of collagen and other compounds that help the skin and blood vessels to withstand the impacts that lead to bruises. Zinc and iron are essential minerals that help with wound healing. In addition, iron deficiency results in anemia, another cause for constant bruising. Bioflavonoids such as citrine, rutin, catechin and quercetin are extremely valuable in correcting a tendency toward bruising. One can include foods such as amla, citrus fruits like oranges, mosambi, sesame seeds (til), beetroot, bananas, etc. into their diet to beat bruising due to nutritional deficiency. (Read:

Von Willebrand disease is an inherited bleeding disorder that affects your blood’s ability to resulting in heavy, hard-to-stop bleeding after an injury. This disease occurs when a protein called von Willebrand factor is present in low levels in your blood or the protein doesn’t work well. The signs and symptoms, according to the National Heart, Lung and Blood Institute (NIH), include –

Worse cases of VWD have severe bleeding episodes for no reason. Most cases of VWD are mild, and you may need treatment only if you have surgery, tooth extraction, or an accident.

If you have low blood platelets due to underproduction of platelets from chemotherapy or cancers such as leukemia, lymphoma, or multiple myeloma, you could get constant bruising. Platelets are made in bone marrow and their normal count is considered to be 150,000 to 400,000. (Read: Amla can reduce your cancer risk by half!)

You may have a low platelet count from bleeding disorders such as thrombotic thrombocytopenia purpura (TTP) or idiopathic thrombocytopenic purpura (ITP) that could affect the body’s ability to form blood clots normally. Thrombophilia is a term that describes an increased tendency to form excessive blood clotting. Clots that form in the blood vessels may lead to bruising.

Hemophilia is the opposite process of thrombophilia. In people with hemophilia, there is an increased tendency to bleed because of abnormality of blood clotting factor that does not allow the formation of clots. Unexplained and excessive bleeding or bruising is one of the symptoms of hemophilia. (Read: World Haemophilia Day 2012: Are you aware about the disease?)

Easy bruising is also a characteristic manifestation of collagen disorders that are inherited, for example, Ehlers-Danlos syndrome (EDS). Bruising occurs because the capillaries and blood vessels surrounding the connective tissues become fragile and break easily. Extensive bruising, delayed wound healing, rupture of arteries leading to severe internal bleeding or premature death, and rupture of hollow organs such as the intestine or the gravid uterus (fetus developing in the uterus) are the predominant features of this syndrome.

Certain medications such as blood thinners like warfarin and aspirin that thin the blood or stop it from clotting can make you susceptible to constant bruising. NSAIDs such as ibuprofen, corticosteroids such as cortisol or prednisone, and even SSRIs such as Prozac may cause easy bruising. Natural supplements such as ginkgo biloba, fish oil and garlic when used in excess may cause blood to thin and lead to easy bruising. However, this happens only in rare cases since supplements alone cannot thin the blood excessively unless used alongside blood thinning medications.

Call your health care provider immediately if you feel extreme pressure in a bruised part of your body, especially if the area is large or very painful. This may be due to a condition known as ‘compartment syndrome’. This is potentially life threatening and requires prompt medical attention. Also call your doctor if you have signs of infection around the bruised area, pus, or fever.

Given the fact that any of these conditions could be contributing to the constant bruising, a full medical evaluation is necessary to determine the exact cause. It may turn out to be nothing serious, but why take the risk?”

Click here for the original source of this article.