Zoe is living with Ehlers Danlos Syndrome but has been fortunate to receive help from those in her community aware of her condition and needs. 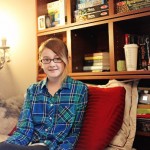 “Zoe Hennessy and her mom Heather headed out of their Roblin home on Saturday morning.

Little did 10-year-old Zoe know, it was a ploy to get her out of the way while a crew rushed in to give her bedroom a complete makeover.

“She took me out for a whole day and then we came home, and she sort of disguised it when we came home and said that my room was such a mess,” says Zoe, remember the events of Oct. 19. “My dad pushed me down the hall and she made me cover my eyes.”

Zoe is living with Ehlers Danlos Syndrome — a rare, incurable genetic disorder of the connective tissues. It can affect skin, bones, tendons, muscles, cartilage, and organs. For her, it means a life with limited mobility, often in a wheelchair when she is healing from sprains and injuries.

Her brand new bedroom is designed with accessibility in mind. A new desk, bed, and bookshelves leave the room open enough that she can get around easily. And new paint on the walls, along with some new bedding that Zoe got to pick out for a “couple years down the road,” give Zoe’s room a fresh face.

There’s even a flat-screen TV on the wall that Best Buy in Kingston gave a discount on when they heard the cause.

Hospice Lennox and Addington spearheaded the bedroom makeover after reading a story about Zoe in the Napanee Guide. The more than $1,000 for the project came out of the Hospice’s Wish Fund.

“We read the article in the paper,” says Kim Ayling, executive director for Hospice Lennox and Addington. “We try to grant a couple of wishes each year. Obviously a young girl in our community…she sounded like she had a vibrant personality and it was unfair she was afflicted by this disorder. We thought, why don’t we do our best to make her room more accessible for her.”

The Wish Fund is supported by many local individuals including the Thompson family and Peter and Jane Good, who recently donated to the fund through the Gardening and Giving program.

Allison Dickson-White and Brent White donated the paint for Zoe’s room, and painted the walls.

Students at NDSS Revive program assembled the Ikea furniture, that was picked up in Ottawa by volunteers Bob and Wendy Brockmeyer.

Zoe’s mom, Heather, is continually surprised by the outpouring of support that the community has offered her family and her daughter.

Ever since the Guide ran an article about a fundraiser for Zoe, donations, fundraisers, and help have been offered to the Hennessy family.

“I’m feeling a little overwhelmed really,” says Heather. “I wasn’t expecting the response that we’ve been getting. The room was a huge one, because she couldn’t get her own things. I don’t think anybody who didn’t know her before would understand what it means to her, and so what it means to us.”

When Zoe saw the room for the first time, she says she “just sat there” for a moment, stunned.

But she loves it.

“They had to do it all in one day,” she marvels.

Zoe’s life is gradually becoming more accessible to her. Next on the list for the house are some new features that will allow her to get around more easily on her own.

“We’re now in the process of getting the stair lift, and changing things in the bathroom,” says Heather. “She can’t get up the sidewalk from the bus into the house. There are some really fundamental things that are going to increase her independence.”

Other challenges will continue to arise. Zoe has trouble getting in and out of her wheelchair right now, and on Monday her hips and stomach were bothering her.

“She’s having trouble holding herself together,” says Heather.

Heather says that one morning in April she woke up and couldn’t use her hand anymore. She had to go through months of rehabilitation. A simple wrong movement can leave Zoe in need of months of rest and rehab time.

“You never know what you’re going to get,” she says.

At one point, Zoe was in so much pain through her entire body that she could only use her right arm.

The support of the community gives Zoe something happy to think about during rough times. She recently was a special guest at a Kingston FC soccer game, where they held a special fundraising collection for her and brought her out on the field to introduce her.

“That was a big positive memory for her, something to think of when things are hard,” says Heather.

Zoe goes to school almost every day, missing some hours here and there for appointments with therapists, specialists, or doctors to handle the symptoms of EDS. The school is working with the Hennessy family to make Zoe’s environment suitable for her to learn, including making some accessible technology available to her, as she has difficulty holding a pen or pencil.

Heather marvels at the giving attitude of the people who have supported a number of fundraisers over the past several months.”

“What got me was everyone apologized if they gave $10 or $20,” she says. “They didn’t buy anything from our fundraiser. They’d say, ‘here is $10, I’m sorry it’s not more.’ Your $10 and somebody else’s $10, it adds up to our stairlift and our bathroom independence and all those things. It’s extremely generous. You’re doing this for my child, who you don’t know. It’s tremendous.”

Zoe is blessed to have services from many organizations available to help her manage her conditions with Ehlers-Danlos Syndrome.