Ehlers-Danlos Syndrome Canada lit up Niagra Falls and spread awareness with this article in the “Niagara Falls Review”. 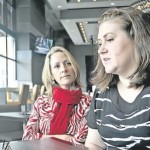 “They don’t look frail and fragile.”

“If you look at us, we look healthy but, on the inside, there are so many problems,” said Tiffany Skladan, founder and president of the Ehlers-Danlos Syndrome Canada.

Ehlers-Danlos Syndrome is a genetic condition that affects the collagen production in the body.

Collagen supports the connective tissues, which are responsible for supporting and structuring the skin, blood vessels, bones and organs.

“Basically it effects your joints and your skin and makes everything in your body weak,” Skladan said.

“The glue in your body doesn’t work properly any more.”

Each day can be a challenge.

“When you know you can hurt yourself from almost nothing at all, you really look at what you’re going to do that day,” she said. “Sometimes, you decide that what you were going to do isn’t worth the risk.”

While described as a rare condition, Skladan and other members of EDS Canada say all too often a patient is misdiagnosed because doctors aren’t familiar with the syndrome.

“Stomach issues, knee pain, migraines … there’s a constellation of symptoms that come together and a doctor might just treat you per symptom,” said Kathleen Eubanks, EDS Canada vice-president.

“They’re not looking at the whole picture.”

Eubanks said the non-profit agency conducted a survey of its 400-plus members across the country and discovered the average wait for a proper diagnosis was a staggering 10 years.

Representatives from EDS Canada were in Niagara Falls earlier this month to see the falls lit up in red and white in recognition of EDS Awareness Month.

Through public education initiatives such as lighting the falls, the group hopes to raise awareness of what is known as “the invisible condition.”

“Now is the time to put forward some best care practices with the hope that future generations can come to a quick resolution when it comes to a diagnosis,” Eubanks said.

“We just want to make the next person’s journey a bit easier than ours was,” Skladan added. “If I can save someone a year of not knowing, then it will be all worth it.”

According to EDS Canada, there are an estimated 7,000 Canadians living with Ehlers-Danlos Syndrome. There is no cure.

The 17-year-old made headlines recently after a story surfaced that her high school told her she couldn’t attend her prom because she had missed so many classes and only had 16 of the 30 credits required to graduate.

Her school, Holy Cross Secondary School, has since reversed the decision and the teen will be allowed to attend her prom.  For more information, visit www.ehlers-danlossyndromecanada.org.

More awareness is needed so that schools understand EDS and will make accommodations for students like Katie.