When is Flexible Too Flexible? Ehlers-Danlos Syndrome!

It is interesting that genetics don’t seem to be consistent in this family.
By Jeff Leen, The Washington Post. 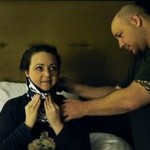 “Mildred Burke had one of the strongest necks in the world.

A champion pro wrestler in the 1930s and the first female athlete to earn $1 million, Burke was only 5 feet 2 inches tall, but her bulging neck measured 14 inches around. To entertain the crowd, she would lie on her back in the center of the ring and lift her body off the mat using only her head and neck, in what is known as a “bridge.”

Mildred Burke’s great-granddaughter has one of the weakest necks in the world.

Kelly Koep, 27, of Grants Pass, Ore., has Ehlers-Danlos syndrome, or EDS, a genetic disorder that interferes with the synthesis of collagen. Once thought to be extremely rare, EDS was identified at the turn of the 20th century and comes in six forms that range from mild to severe.

Evidence suggests the most common form, which often results in double-jointedness, occurs in one in 100 people; about one in 5,000 have more severe cases, which sounds like a nightmare out of science fiction: The ligaments in the body cannot hold the bones together.

Koep’s is one of the most severe cases. Over the years, she has repeatedly dislocated elbows, knees, shoulders and – four times – her jaw. “I’ve always been that kid who could do weird, contortionist sorts of things,” she said. “I can basically fold my back in half and rest my shoulder blades on my butt.”

More recently, the increasing instability in her spinal column required her to wear a neck brace and to use a wheelchair. She got up only twice a day, to use the bathroom. There was concern her loose vertebrae might be compressing the arteries in her neck, risking stroke.

“It felt like my head was so full of pressure that it was going to explode from the inside out,” she said.

On Christmas Eve last year, she came to Doctors Community Hospital in Lanham, Md., for a 3 1/2-hour surgery by Fraser Henderson of the Metropolitan Neurosurgery Group.

Two days after the surgery, in a hospital hallway, she was able to walk more than 200 feet for the first time in more than a year.

“I immediately felt better after the surgery,” she said

Early on, Koep’s parents recognized she was different.

As a toddler, she dislocated her elbow when she fell out of bed. She dislocated it again while being carried by a relative. That didn’t look good: Her mother, Wendy Koep, also had been a pro wrestler.

“The second time it happened, the hospital accused my mom of child abuse,” Koep said. “They held her at the hospital and called Child Services on her. They couldn’t believe her. Finally, they got ahold of my doctor.”

Always, it was just loose joints, growing pains. Her hips and feet gave her trouble when she walked. Then the parade of sprained ankles, dislocations, subluxations. She was always on crutches at school. She was strong, like her great-grandmother – the same body type, compact and stocky. But even though she was stronger than the boys, she couldn’t play sports because of her weak joints.

Fifth grade was knee braces, sixth grade was ankle braces, seventh grade was a back brace. She had trouble breathing, and they said she had athletic asthma. She got blurred vision. She couldn’t concentrate in class. At 16, she dropped out and ran away from home. Eventually, she came back, got her G.E.D., learned to meditate and beat back her depression.

In 2005, when she was 19, an orthopedic surgeon told her she probably had a condition called EDS, hypermobility type. It was incurable, and surgery was not recommended.

She researched EDS on the Internet and didn’t find much. Loose joints have been around forever, but EDS was named only at the beginning of the 20th century, after the two physicians who first described it, Edvard Ehlers from Denmark and Henri-Alexandre Danlos from France. It was not until 1998 that the criteria for an EDS diagnosis were established.

In 2006, Koep and her mother attended a conference of the National EDS Foundation in Austin, Texas. “Everything they were speaking about sounded exactly like me,” Koep said.

She resolved to live as best she could. She was careful to sleep flat on her back, and she did exercises to strengthen her muscles. She went to beauty school, and after graduating she and her boyfriend started a new life in Las Vegas, where she worked at the spa at the MGM Grand.

But her condition followed her. “It was too hard for me to work in the salons and hold up blow driers,” she said. So she became a cosmetology instructor.

One day she took an ill-advised ride on a roller coaster.

“I couldn’t walk straight” afterward, she said. “I had so much pain I couldn’t even see straight. That roller coaster could have killed me.”

One doctor in Las Vegas thought it was multiple sclerosis. Up to this point, she thought that EDS affected only her joints. Now she thought, “Is it possible that EDS is affecting my spine?”

Another doctor, an expert in brain and spinal abnormalities, told her it definitely was. “He said the ligaments in my spine were loose and not holding up my head, and he said it was causing a spinal-cord compression.” He prescribed a brace. “He said I might have to wear the neck brace for life and deal with the disability.”

She moved back to Oregon to live with her mom, her condition clearly worsening. She suffered from tremors. “I was getting so many neurological symptoms that I couldn’t even live my daily life. I got to the point where I started choking so bad I almost died a few times.”

“Five years had gone by since she had done her initial research on EDS.”

“I got back on the Internet and I started Googling around,” she said. “This time there were results all over the place. Facebook was just a huge network of EDS people talking about special surgeries. A lot of them have the same problem I have with my spine. The main surgeon that everyone was researching was Dr. Henderson. That is how I first heard about him.”

Kelly is doing better after her surgery. She resolved to live as best she could.