This Irish mother feels the uncertainty over special water allowance limits are an “insult to the ill”. Her daughter, Lauren, has EDS and intestinal failure. It requires extensive water usage to manage her condition. The government and water department are to publish a list of illnesses which will allow sufferers to have their water bills capped. However, Lauren and her mother must wait 2 years, and they are concerned whether EDS will be considered a “qualified illness”. 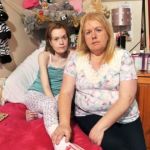 Read more about this family’s situation.

“A woman whose daughter requires huge amounts of water daily to help her live with a rare genetic disorder has called on the Government and Irish Water to immediately publish a list of illnesses which will allow sufferers to have their water bills capped.

Callie Walsh said her daughter Lauren (24) has a rare illness called Ehlers Danlos syndrome which requires her to be fed through her jugular vein 18 hours a day and which also results in her having to use the toilet up to 100 times a day.

“Lauren has Ehlers Danlos syndrome and unfortunately she also has intestinal failure so God love us, her stomach and her bowel don’t work,” said Ms Walsh, from Passage West in Co Cork.

“We have to be so careful with hygiene that she wouldn’t get septicaemia or that she wouldn’t pick up an infection when she’s being fed, but she also has two tubes in her tummy, one to drain her stomach contents and the other to ensure her medication goes directly to her bowel.

“We need water not only for the handwash where Lauren does a three- to four-minute prep before she gloves up to feed herself, but Lauren may also need to flush the toilet up to a 100 times a day because of her condition.

“She has no control over that and her bedclothes would need to be changed a lot more regularly than anyone else, so as you can imagine the washing machine is going constantly in our house and the floor is washed twice a day to keep dust at a minimum.”

No way to cut back

Ms Walsh says there is no way they can cut back on their water usage.

She is concerned that the rare Ehlers Danlos syndrome won’t be included among the illnesses listed by Irish Water eligible for caps on water bills.

“That list isn’t going to be published for two years and I guarantee it that when it is, it will not include Ehlers Danlos syndrome because it’s such a rare condition and in the meantime we are going to be left facing a huge water bill from Irish Water – that’s my big fear.”

Irish Water has said people who have a medical condition should state this on their application form and their water usage will be capped at the assessed rate.

People will not have to provide evidence of the condition as Irish Water is planning to operate an honour system.”

Affordable access to utilities is critical for those living with chronic health conditions, such as Ehlers Danlos Syndrome.