This UK Team is Raising Awareness for Ehlers-Danlos Syndrome

by Colin Osborne for Match Report. 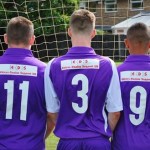 “Newly formed Sandy U21 side, part of Sandy Football Club, started their new league campaign in the Bedford Sunday League against Hitchin. Sandy where slow out of the blocks as Hitchin put pressure on Sandy but great defending from the back four especially Sam Jones who was solid throughout the game.

The break through came on the 26th minute when a great ball from the midfield fell to Johnnie Stratford who made no mistake. Hitchin pulled back to make it 1 – 1 at half time but the second half saw Sandy dominate the midfield with Hill, Baker, Gaylor, Knight and Rushton. Two great corners from J Stratford saw Alex Baker and S Jones score great headers to make the score 3 – 1. However, Hitchin pulled one back but the game was won when A Baker who rounded 3 players and fired it in the goal which gave the Hitchin goalkeeper no chance to save. Which ended the match 4 – 2 to Sandy.” “The U21s, sponsored by Kiers of Tempsford, were wearing their new kit which Manager Ian Rushton and no 3 player Michael Rushton were proud to show off as the team’s contribution to raising awareness for Ehlers-Danlos Syndrome. Laura, Ian’s daughter and Michael’s sister, who suffers from this condition used to play football for Sandy Ladies; however, no longer being able to play, the boys were keen to show their support.”

How can we promote Ehlers-Danlos Syndrome Awareness in our local community?