The Improve the Life of Children (ILC) program in Canada is making progress promoting support and awareness  for children with chronic pain like Ehlers-Danlos Syndrome.. 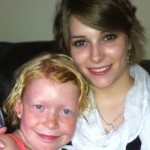 “Diagnosed with Ehlers-Danlos Syndrome in 2009, Oakville’s Brooklyn Mills became the inspiration behind the ILC Foundation — nearly three years later, the organization has made it its mission to help children across Canada suffering from all chronic pain disorders.

The driving force behind Improve the Life of Children (ILC) is the need to help the little ones and adolescents, and their families, with chronic pain diseases who fall through the cracks when it comes to getting the treatment they so desperately need.

In the last two years, Brooklyn, 20, has had 16 surgeries, most of them dealing with her spine, neck and brain. She has a shunt that drains built up spinal fluid and is also on blood thinners after developing a blood clotting disorder as a result of the Ehlers-Danlos Syndrome (EDS).

EDS is a rare condition that is difficult to diagnose, treat and care for. It affects only one in every 5,000 people and is marked by the inability of the collagen in the body to hold itself together.”

“It’s been a process,” said Rebecca Mills, Brooklyn’s mother. “Every single time she’s been ill, they can’t figure out what’s wrong with her in Ontario, so we’ve ended up having to travel to the U.S. and they’ve always figured it out, in what needs to be done, and it’s always been successful.”

Rebecca notes part of the reason why this has been the case is because there are centres in the U.S. specializing in EDS that simply don’t exist in Canada.

Rebecca is the co-founding director of the ILC Foundation, along with executive director and trustee Sandy Smeenk, who says she co-founded the organization with Brooklyn’s mom after witnessing the struggles of the Mills family and realizing they weren’t alone.

In the last two years, the Mills have spent $150,000 on Brooklyn’s treatment in the U.S. and Rebecca says they still have approximately another $150,000 they need to pay — the Mills have been twice denied reimbursement for their daughter’s treatments by Ontario’s health system.

“The only thing we’ve received is $495 for a consultation with a surgeon in the U.S.,” said Rebecca.

In addition to a lack of local EDS centres, Rebecca attributes the gap in care to the fact that the condition is not very well-known and there isn’t much information out there on it.

Smeenk echoes that, adding there is a lack of best-care practices in Canada with regards to dealing with chronic pain diseases, like EDS.

“In the healthcare system, we rely on best-care practices. What we’ve learned is that these do not exist for the diagnosis, treatment and care of a broad and inclusionary group (children and young adults) of chronic pain diseases and disorders,” she said.

When she had learned these best-care practices did not exist, Smeenk immersed herself in learning and understanding why this was the case, and essentially went about doing it herself, through the ILC.

Smeenk says she came across the National Institute for Health Research’s undiagnosed disease program in the U.S. and adapted the model to develop a new program called the Difficult to Diagnose Disease (DDD) program.

She then presented her findings to the ILC Foundation’s medical advisory board chair, Norm Buckley, who is also professor and chair of the Department of Anesthesia at the McMaster Children’s Hospital in Hamilton.

“The DDD program is pretty much a step one to step 10 on how to create some best-care practices here,” said Smeenk. “The plan is to have an adult and child specialist in each of the major medical disciplines and have a multi-disciplinary group come together to learn from the experts through workshops.”

In addition, the ILC is funding and facilitating a scientific workshop Oct. 4-5 to set the parameters of how the foundation will move forward with its DDD program.

Although Brooklyn and her EDS were the inspiration behind the ILC’s creation, the foundation deals with several chronic pain conditions, including: gastro-intestinal issues, such as Crohn’s disease; neuropathic pains caused after cancer treatment/care; multiple sclerosis (MS); arthritis; fibromyalgia; and helping youths transition into adult care from the hospital system.

“There are peer support groups for the adult population, but not for teens and young adults. They just don’t exist,” Smeenk said.

“ILC’s review has been that the healthcare system supports the child population with their parents very well through the hospital. But when you hit adolescence and your young adult years, those peer support groups aren’t there.”

ILC tries to fill the gap in that respect.

Since its inception, the ILC Foundation has assisted in more than 150 cases across Canada, such as:

• The case of Dominic Boivin, a Calgary teen who took his life after four years of struggling with constant, and mysterious, body-wide pain. The ILC Dominic Boivin Fund was set up to raise awareness and funds to help bridge the gaps of chronic pain and its associated mental health in children and youths through a national peer support network

• A 10-year-old Caledon boy suffering from neuropathic pain after his cancer chemotherapy treatment. The boy’s mother reached out to ILC, which provided resources to help increase social and physical activities through sport programs, a special care package to raise his spirits and provided him with tickets to a Toronto Rock lacrosse game, donated by the sports organization

• A 16-year-old Burlington teen who attempted suicide because of underdiagnosed chronic pain. The teen and their family met with a geneticist at McMaster Hospital working with the ILC and its DDD program and they discovered that other members in the family had confirmed diagnoses of EDS Joint Hypermobility. The family has since connected with several other families experiencing similar situations through ILC’s peer support network

Smeenk says she has been trying to raise awareness of the problem of chronic pain in children, youths and the young adult population at the Ministry of Health level.

“In January, the Ministry of Health called us into a meeting because they had heard about the ILC from families who had written the health minister saying they had received better care from the ILC Foundation than they had in 10 years in the healthcare system,” she said.

The nearly two-hour meeting was spent discussing the ILC and how the foundation is creating an integrated peer support network in the Halton, Peel and Hamilton health sciences to help bridge the gaps in healthcare, Smeenk explained.

“The health minister’s office had told us they were working on a framework for chronic pain in adults, but they had no idea that children in pain was such an issue — that was January 2013. That made me mad,” she admits.

Thankfully, Smeenk says, the doctors on the ILC medical advisory board have told her change is coming.

The ILC has vetted and organized what will become Canada’s first 21-day pilot program for rehabilitation for parents and children suffering from chronic pain through the McMaster Hospital.

The program will be designed so that medical school students can participate in its delivery and familiarize themselves with the “invisibilities of chronic pain” conditions, explains Smeenk.

“Our goal is to solve the problem of pain. It’s the critical challenge of chronic pain in children and youth to bridge the gaps,” she said. “And that’s what we’re going to do through the DDD — to fund the research so that best-care practices can be developed and raise awareness at the Ministry of Health level.”

There are now indications of positive change as a result of promotion by the Improve the Life of Children (ILC) program in Canada.

Click here for more information on the ILC Foundation.