Michael says he wants to inspire others with disabilities to play sports. 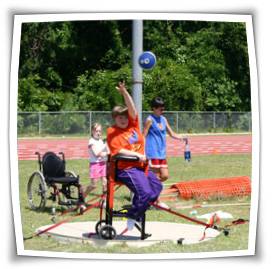 “ROBERTSDALE, Ala. (WPMI) One teenager’s desire to compete has caused an entire community to come together. Thirteen-year-old Michael Parnell is a student at Central Baldwin Middle School. For the longest time he wanted to play sports. The only setback? He suffers from Ehlers Danlos Syndrome, a disease that causes joint pain, joint dislocation and easy bruising.

What’s amazing is all it took was some phone calls, some e-mails and a family from Tampa, Florida, to make it all happen. They all gathered Tuesday at the school for a big announcement. Michael was the center of attention.

“When you become a physically challenged athlete there are limitations and you’ve got the opportunity to either let it be a limitation or to overcome that limitation. Michael has definitely decided he wants to overcome any disabilities that he has,” said Chuck Anderson, Michael’s Principal at Central Baldwin Middle School.

That “one of kind” personality is set to sore with the delivery of Michael’s first sports chair.

“How do you feel about the chair so far?” we asked Michael. “It’s different but I like it,” he said.

It’ll take some getting used to and a lot of practice.

Seventeen-year-old Joey Chiavaroli, a national wheelchair champion, is in Baldwin County from Tamps to give Michael his first racing lessons. Now Michael, who has competed in track and basketball using a regular wheelchair, says he wants to inspire others with disabilities.

“What I want to do with sports is like help other schools and disabled children learn to do sports and get know how sports can help you,” said Parnell.

Coach Anderson says it’ll be easy to look up to Michael.

“He competed in regular middle school track meet and the Alabama High School Athletic Association has mandated that physically challenged athletes have to be given an opportunity to participate. We should have done it without a mandate but people were scared and didn’t want kids to get hurt. He was a rock star and a true team participant on our Central Baldwin Middle school track team last year,” said Anderson.

Sports can be very motivating for kids with disabilities.  EDSers should try to stay active to keep muscle tone up, but use caution to prevent injuries.