“Some People thought it Was Growing Pains!”

Rose is struggling with Vascular Ehlers Danlos Syndrome and maintaining a positive attitude. 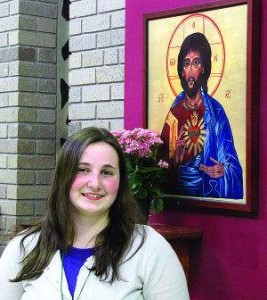 “CHIPPEWA FALLS – Rose Buchmann needs a crutch to walk down the halls at McDonell High School.

A rare genetic disorder is slowly causing the tissues and muscles in her body to break down, making it increasingly difficult to walk. She can’t carry more than 30 pounds because it puts too much strain on her vascular system.

However, Buchmann greets people with a warm smile, and she’s upbeat about her disorder, which leads to a median life expectancy of 48.

“You’ve got to kind of live as life comes,” Buchmann said with optimism, shrugging off concerns about her condition. “Some people don’t live past 40, but they don’t know they won’t live past 40. You can kind of plan your life. It’s really not horrible; it’s not that bad. I don’t want people to feel sorry for me – there’s nothing to feel sorry for.”

Buchmann, like her mother and all five of her siblings, has vascular Ehlers-Danlos syndrome. She was diagnosed with the genetic disorder as a sophomore.

“It’s a connected tissue disorder – it affects the muscles and tissues,” she said. “So basically, it affects everything. It’s degenerative – every year, they think it will get worse and worse.”

As a child, Buchmann said she struggled to walk the nearly one mile to school, finding it fatigued her and hurt her knees and ankles.

“Some people thought it was growing pains,” she said. “Up until 10th grade, I thought I was imagining it.”

However, Buchmann can swim well. She started when she was 8. She joined the McDonell/Chi Hi co-op swim team as a freshman. She didn’t participate as a sophomore, as her condition worsened. She trained hard in the summer before her senior year and did well in her final year of competition.

“It was a big deal to me, just that I got to swim,” Buchmann said. “Being able to do that helped me both physically and mentally.”

“She just has a positive attitude,” Reiter said. “She’s always the first to volunteer for everything. Despite her hardship, she’s been able to maintain and make sure she gets her work done.”

Buchmann said her faith, and 13 years of Catholic education, has helped her.

Buchmann is planning to attend the Milwaukee School of Engineering, pursuing a degree in biomedical engineering. She ponders if there is a cure for her disorder and if it can be produced in her lifetime.”

Rose is making an impact by providing awareness for Vascular Ehlers Danlos Syndrome.