This six-year-old girl may have challenges, but she attends school and has many friends. She loves dancing, singing, and swimming. 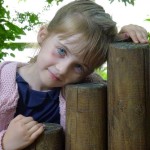 “An inspirational six-year-old girl with a rare condition has told of her daily battle with the syndrome.

Lillie-Grace Tomlinson was born with Ehlers-Danlos syndrome (EDS) but was only diagnosed last year. The condition is caused by faulty collagen, which gives the body strength and elasticity.

She said: “I get tired quickly as my body hurts, my kneecaps move round my legs sometimes. Mummy puts me back together again.”

And there is a high chance that she could end up in a wheelchair, although her family are dong everything they can to keep her on her feet for as long as possible.

Her condition only became apparent last year when Lillie-Grace was out walking in Dovedale.

Her mother, Becky, 26, from Derby, said: “We were walking along normally when she fell to the ground. She screamed, a real piercing scream and didn’t want anyone to touch her.”

Becky got Lillie-Grace back to the car and took her to see the doctor.

Becky said: “Lillie-Grace has attention deficit disorder as well so we were under a paediatrician anyway. I took her to see the doctor who referred us to the genetics department.”

The family was also referred to social services because of Lillie-Grace’s bruises. EDS causes the body to bruise more easily and Lillie-Grace’s blood also does not clot properly, which makes bruising worse.

After various tests, it was found that Lillie-Grace suffered from EDS – although the family is still being monitored by social workers.

Becky said: “I have always been very mobile, my knees clicked and my side of the family were always very good at dancing.

“It turns out that I had it but didn’t have any of the pain that Lillie-Grace does. There is a 50/50 chance that it can be passed on and because we have two other children, we won’t be having any more.

“The fact that we are being watched by social care isn’t great but Lillie-Grace can be covered from head to toe in bruises, which doesn’t look great if you have her in shorts in summer.”

Becky and husband Jay, 26, are hoping that exercises will help Lillie-Grace to cope without needing a wheelchair. And, while she may have challenges, she attends school and has many friends.

As part of EDS Awareness Month this month, the Walkers and Talkers toddler group that Becky runs has raised £94 for Ehlers-Danlos Support UK. Becky said: “I would like to thank everyone who came to the event and to the charity which has done so much to support us.”

Lillie-Grace explained what it was like living with Ehlers-Danlos Syndrome:

“I am six years old. I love dancing, singing, Rainbows and swimming. I enjoy school and have lots of friends.

“I have a condition called EDS. It means that I get tired quickly as my body hurts, my kneecaps move round my legs sometimes and my thumb does the same but mummy puts me back together again.

“I now have a bandage on my knee to hold it together as I do my exercises.

“Out and about, I wear my pink boots to stop my ankles rolling and they stop me falling over. My bruises are really big and last ages.

“I have been to the hospital lots of times to check I am okay. Sometimes I feel really good and fine and sometimes I have my wheelchair.

“EDS hurts my joints but also my tummy so I have to be careful what food I eat. I don’t like having EDS as people don’t listen to me or my mummy as they say ‘you look fine’. I don’t feel fine but I am always smiling!”

Her family is spreading EDS Awareness in the UK.

We appreciate your Comments & Likes