Riley Cox, a 9 year old with Ehlers-Danlos, is Going to Disney World 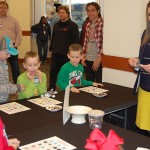 “The Christmas surprises kept coming Sunday afternoon at Bristol Motor Speedway for the kids at the Children Exceeding Expectations School.

One by one, the kids arrived, some in costume, on the third floor of the Bruton Smith Building expecting a simple Christmas party. As they stepped from an elevator, they were met by the smiling familiar faces of friends, but also personal greetings from former American Idol contestant Jason Castro and from members of the Christian bands The Sidewalk Prophets and NewSong.

Games like Pin the Nose on Frosty, bean bag toss and Snow Bingo were available to the kids, all who either suffer from cancer or an immune deficiency disorder or are siblings of those affected, just before they were given their own personal concert from their musical guests. Castro kicked things off with a ukulele version of “I’m Dreaming of a White Christmas” that included clapping, singing and crowd participation.

Soon after Castro’s tune, The Sidewalk Prophets sang “Rudolph, the Red Nosed Reindeer” for the row of about a dozen kids and organizer Haley Dietrich from Children Exceeding Expectations. But when the group began “Jingle Bells,” they announced that all the parents would be stepping away to prepare an even bigger surprise in a neighboring room.

Lead singer David Frey properly prepped the kids for the big surprise that they were about to open. He told them it would require teamwork, and in a line they were taken through doors into the room with the surprise, and then lined up around a big wrapped present.

When given the word, they ripped open the present to see a whole pile of Mickey and Minnie Mouse balloons set free toward the ceiling. That’s when the announcement was made that the Disney character balloons weren’t their surprise, but that they’d be meeting the characters in person at Disney World, with their entire families, from Jan. 31-Feb. 4.

Frey, who was the one slated to reveal the surprise, said he’s a huge Disney World fan, and was joking that he’d love to go along with them.

“It was an honor to see the look on their faces,” Frey said. “It took a second for them to realize what was going on. They, at first, might have thought they were getting a lot of balloons, then realized that they were going to Disney World.”

Tiffany Cox was equally as moved for her 9-year-old daughter, Riley, who was sporting a “All I Want For Christmas Is A Cure” T-shirt. Riley had been diagnosed when she was 2, Cox said. She suffers from a rare blood disease and a rare connective tissue disease called Ehlers-Danlos syndrome, which made Riley lose hearing in her left ear. There’s no cure, Cox said, but they’re seeing their 10 specialists and moving forward.”

Cox, her husband, Michael, and Riley’s brother, Brayden, and sister, Madison, will all be joining the group on the trip. Riley said the realization that there were all going to Disney World was “like magic.”

This is a great program that helps disabled children connect with others and learn together.