Jane continued to give back to others, in spite of her struggles with type-4 (vascular) Ehlers-Danlos syndrome, an incurable, inherited connective tissue disorder. 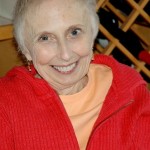 “There are going to be a number of quilts in this story, but remember the blue one with houses on it.

Marykay Zimbrick bought it at a charity auction in Madison, a casino night, in 1997.

It got a lot of use. It became one of those household items you look at often but might not really see.

Zimbrick is a quilter . That’s hardly a surprise. Somehow when I wasn’t paying attention, quilting became all the rage, especially, it seems, in Madison.

There’s a big Quilt Expo Sept. 5 to 7 at the Alliant Energy Center’s Exhibition Hall. Local author Jennifer Chiaverini has built an impressive franchise of novels with a quilting theme.

Jane Rich was a quilter, even before quilting was cool.

“It was her passion,” said Karen Saunders, a close friend, who met Rich through the Mad City Quilters, when Saunders moved to Madison in 1995.

Jane had been in Madison since 1970, having arrived with her husband, Dan Rich, a distinguished faculty member of the UW-Madison School of Pharmacy and Department of Chemistry.

The couple met on a blind date at the University of Minnesota. Jane later claimed to have been bowled over by Dan’s red wool socks. They married in 1964, the same year Jane graduated with a degree in sociology.

In 1973, after three years in Madison, Jane was diagnosed with type-4 (vascular) Ehlers-Danlos syndrome, an incurable, inherited connective tissue disorder.

She refused to let it define her. She raised two daughters, quilted, volunteered and tutored. She wanted to make a contribution to her community, and did. And even when she was no longer mobile or able to get out much, she could order quilting material and books online.

In May 2012, there was a celebration of her life at Olbrich Gardens.

Karen Saunders had a moment with Dan.

Well, Dan said, it would be nice if something could be done with all the quilting materials Jane collected.

Saunders reached out to her friend, and fellow quilter, Jeanie Sieling, who serves as president of the Friends of the Fitchburg Library, and Sieling drew in Zimbrick, a quilter and co-chair of the library’s capital campaign.

The beautiful and spacious new Fitchburg Public Library on Lacy Road opened in June 2011, but the capital campaign continued.

The three women put their heads together. Jane was a reader and Fitchburg resident. How about something to help the library?

Saunders visited Dan to see exactly what Jane had left. It was astonishing. There were some 200 quilting books, and the fabric! Quilters refer to their stored fabric as a “stash,” and Jane’s stash was, well, rich.

Karen’s husband provided a spare room at his office to store it.

While they debated what to do with the fabric, it was determined that Jane’s 200 quilting books would go to the Fitchburg library. About one-third were added to the library’s collection — surely one of the most extensive holdings of quilting volumes anywhere — while the rest were sold, with proceeds going to the capital campaign.

It was decided to do the same with the fabric. Word went out to the Madison quilting community and on a Saturday late last summer the sale was held. The fabric was sold by the pound.

That day, a customer approached Dan.

“Your wife had quite a stash.”

Others donated fabric to sell as well. In the end — with a matching contribution from an anonymous donor — more than $2,000 was raised for the library.

The organizers had saved some material and last March a group of some 15 or 20 gathered and made 92 colorful pillowcases for the University of Wisconsin Children’s Hospital.

Finally, Jane had left behind some quilt blocks that she had been unable to fashion into a finished quilt. Sieling and Saunders worked putting them together, and then Zimbrick took it to a longarm quilter, Tamara Gunwall, who applied the finishing touches.

Earlier this month, the quilt was hung on a wall in the Fitchburg library. A plaque is being prepared that will explain its presence in honor of Jane Rich.

I asked Saunders what her friend would think of all this.

“I think Jane would be thrilled and gratified,” Saunders said.

It was during the library sale of Jane’s materials last summer that Zimbrick had a flash of recognition. Where had she seen that fabric before?

When she got home, Zimbrick pulled down the old blue quilt with houses on it that she had bought all those years ago at a benefit for homelessness.

She turned it over and read the small identification tag. The quilt had been made and donated by Jane Rich.

Zimbrick could hardly believe it.”

Jane has left her legacy of making others feel better while discovering her quilting.