The Dream Factory has a great program for children with disabilities. This will be a special vacation for Haley and her family. 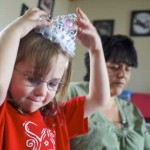 NEWPORT — Like many girls her age, Haley Grant loves dressing up as a princess. The 4-year-old has slippers, gowns and crowns she regularly dons when she pretends to be Ariel, Belle, Cinderella or other characters made famous by Walt Disney Studios.

“Haley, however, has something other girls who dream of becoming princesses don’t — a chronic but rare disease. She suffers from Ehlers-Danlos, a genetic connective tissue disorder that affects about one in 10,000 children, according to her mother, Christine Grant.

Symptoms include frequent dislocations of her joints including ankles, knees and wrists, Haley’s mother said. The girl also had pneumonia six times in two years, a kidney stone and was hospitalized once a month for the past three months for digestive problems.

A shy child, Haley, through her mother, said she planned to wear her Snow White gown for the makeover.

“This trip means no medical appointment, no physical therapy, no blood draws for an entire week,” Grand said. “Haley gets to be a normal 4-year-old child so she can run and play and just be happy and not have to go through what has become a normal routine.”

In addition to her parents, Christine and Douglas Grant, 41 and 37, respectively, two of Haley’s three siblings — Seth Grant, 13, and Katelyn Grant, 22, are set to fly out of the Bangor International Airport early Sunday morning. Older sister Haddie Grant, 18, was not able to take time off from school for the trip.

The family will stay at Give Kids the World Village, a 70-acre, nonprofit resort located in Kissimmee, Fla., near many of the state’s most popular attractions including Disney World. The resort opened in 1986 to serve children with chronic conditions and life-threatening illnesses.

Christine Grant said she learned of the Dream Factory from the Make-a-Wish organization. It’s mission applies just to children who are suffering from life-threatening diseases.

The Dream Factory is the only children’s wish-granting organization that does not limit its mission to children who have life-threatening illness, according to information posted on its website. The organization believes children with chronic illnesses and disorders also suffer from substantial emotional and physical pain.

It operates under five core values. These values are dedication, responsibility, empathy, attention and mission-driven, according to the group’s website. The organization was founded in 1980 in Hopkinsville, Ky. Since then it has granted more than 25,000 dreams through its 38 chapters made up entirely of volunteers. Two of those chapters are in York and Cumberland counties in Maine.

Christine Grant said that without the help of the organization, the family would never have been able to afford the family trip. She estimated its value at between $8,000 and $10,000.

Haley’s mother said she is so grateful to the Dream Factory, she plans to join its volunteer corps to help make dreams come true for children like her daughter.”

Give Kids the World Village, a 70-acre, nonprofit resort located in Kissimmee, Fla., near many of the state’s most popular attractions including Disney World, has been a blessing for special needs children who need a place to stay .