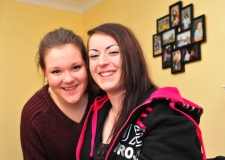 Young performers will take to the stage next weekend to raise funds for a talented musician whose promising career was ended by a debilitating genetic condition.

Heather Willis, from Carlton Colville, was a keen performer, singer, harpist and flautist before being diagnosed with Ehlers-Danlos Syndrome (EDS) – a group of inherited conditions that have left her disabled.

The syndrome, which disrupts the body’s collagen proteins, affects everyone differently but for 21-year-old Heather it means her joints dislocate easily and frequently, and she is often exhausted and in pain.

Her skin also breaks easily, painkillers and anaesthetics are less effective, she sometimes struggles to swallow and keep down her food and there is a danger the illness will eventually affect the functioning of her major organs.

To make her life easier, Heather’s family and friends are fund-raising for a £3,500 lightweight wheelchair that she can operate herself – by putting on a cabaret show at Beccles Public Hall on Saturday, March 9.

Heather, who recently moved from her family home in Matlock Dale to live with her partner and full-time carer Jason Drake in Great Yarmouth, said: “I am really proud of all my family coming together to organise the show. I know a lot of work goes into it and I am looking forward to watching it.

“I used to perform myself so it is going to be a bit emotional.”

Heather cannot manage the standard, heavier NHS wheelchairs and does not want a motorised chair yet because she fears her condition will deteriorate further without regular, physical activity. Her new wheelchair will be fitted to her body to provide better support to stop her slipping down in the seat. It will also be easier to turn.

The NHS has provided a £1,000 voucher towards the chair, which expires in May. However, Heather was not guaranteed to be offered the same level of financial support again – meaning her family were left in a race against time to raise the outstanding £2,500 needed to cover the cost.

Any extra money that is raised could be used to buy medical aids to make Heather’s life more comfortable.

Heather, a former student of Notre Dame High School in Norwich, was diagnosed with EDS when she was 16 and her younger sister Lucy, 16, also has the condition.

It put an end to Heather’s dreams of becoming a music teacher and she had to stop attending Cantor’s Theatre School in Lowestoft. She was also forced to give up playing her harp – something she had done since she was 12 – because her shoulders and fingers dislocate when she plucks the strings and she gets dizzy when she sits upright for too long.

Heather’s joints are now worn from constant dislocation, meaning she can no longer dance and she struggles to walk more than a few steps. She is unable to perform simple tasks at home such as washing up and must use her fist to open the microwave.

Singing is also a problem for music-loving Heather, who suffers from oesophagus spasms

Heather, who used to enjoy busking with her harp in Southwold and has performed at the Christmas fete and at both churches in Beccles, said: “I don’t feel great about what has happened but at the same time I have adapted. I still enjoy watching my little sister performing. I do miss it though. It was my life, it was everything.”

Lucy, who is a student at Sir John Leman High School in Beccles and also attends Cantors Theatre School, came up with the idea for a cabaret show. She has organised the event with the help of their dad Dave Willis and her twin brother Tom, who will compere the evening.

Although she has the same condition as her sister, Lucy is comparatively well. Her limbs are also prone to dislocation but she has been able to continue dancing an hopes to have a career in musical theatre.

Dave and his wife Anne, an A&E nurse at James Paget University Hospital and a nursing officer and trainer for St John Ambulance in Lowestoft, do not suffer from the condition but do have signs of it, such as flexible limbs and stretchy skin.

Tom, a corporal in the 759 (Beccles) Squadron of the air cadets and his 14-year-old brother Daniel, who attends Suffolk FA Referee Academy in Ipswich, also appear to be unaffected by the condition.

Heather said it was impossible to predict what would happen to her in the future, or how her sister Lucy would eventually fare, because every case of EDS was different. “If I am honest and go by the last four years then I am probably going to get worse and not much better,” she added.

We encourage and appreciate your Comments and Likes