Claire Healey tells her story: In September 2013 she will swap the boardroom for the roads of Australia. She is riding for EDS awareness. 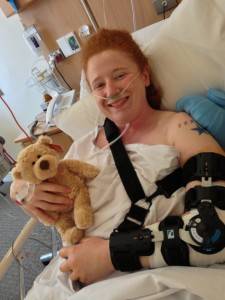 I was born in 1985 into a family of four (which became 6 after my younger brother was born a year later). It was not long before the doctors identified that I had been born with clicky hips. My parents were given the option of the controversial ‘froggy’ cast however opted to persist with double cloth nappies – I feel sorry for the amount of laundry they had to do!

It was around 18 months of age that my first dislocation event occurred. Whilst being swung playfully around by my father, my left wrist / elbow dislocated. It was reduced in hospital and I have some very cute x-rays of my little arm.

Growing up, I was always asked to perform my party trick – walking on my hands with my legs around my head. A pure contortionist! Looking back, it was probably not the best thing to do!

Throughout my younger years sprained ankles and problems with my knees were a common occurrence, as was clumsiness and unexplained bruises. Growing up on a farm meant that I was very active despite all of these setbacks. It wasn’t until around age 10 after complaining of back pain for some time that I was taken to see a specialist at The Children’s hospital at Westmead where scans showed a fracture in one of my vertebrae and postural scholiosis. Off I went to a specialist physio who began an intensive core strengthening program which I am today very thankful for.

As I got older, I was frequently rolled my ankles, was more prone to sprains and ligament tears, experienced problems with my knees giving way and suffered a few broken legs! At school, I was always teased for constantly having an injury – Kids can be so cruel.

At age 16, while playing hockey, I dislocated my right shoulder. The shoulder had never been that great to begin with and I guess this was its final straw. After spending months in a sling and missing school for physio sessions, my orthopaedic specialist performed the reconstruction. The surgery was a success and to date my right shoulder has been fantastic.

Unfortunately, around age 20 my left shoulder decided to dislocate while driving! Funny story really – while driving out from a parallel park I turned the steering wheel a quarter and my left shoulder dislocated posteriorally. The dislocation was reduced in hospital and following an MRI scan ordered by a very sensible specialist, they discovered that I had not only disclocated the shoulder but in fact had fractured the humeral head and torn most of the capsule away from the bone. Off to surgery I went. During all of this, I still managed to hold down a very demanding IT job, working anywhere between 60 and 80 hours a week.

Approximately a year later I had another reconstruction on that same left shoulder as it had stretched out and was dislocating again. Same thing a year later… another surgery. Over time, the shoulder stretched out again and after consulting many shoulder specialists in Sydney, I was told that fusion would be the only way to go yet not one of the specialists was keen to perform it on such a young patient. Luckily with the help of my primary specialist, I found out about the “Kitchen Sink Procedure” for shoulders which was pioneered in the US by Burkhead and Krishnan. After much deliberation, journal research and the financial support of my father, I went over to Dallas, Texas for the operation. This operation provided me with a very stable shoulder for several years. I was able to resume an active lifestyle – I was even running in charity events! All while this was going on, I was on the waiting list to see Professor David Sillence at Westmead Hospital for diagnosis of suspected Ehlers Danlos Syndrome – and yes, I was finally diagnosed.

All went well with that operation until 2010 when I had dislocated the left shoulder several times. Upon X-Ray, MRI and CT review, my specialists found that the titanium screws used in the “Kitchen Sink Procedure” had bent due to the force of the dislocations and had to be removed during a reconstruction. Now as you can imagine, my collagen was not great to begin with because of EDS let alone after 5 previous operations. There was a lot of scar tissue around the braccial plexus which provided challenges. Following this last shoulder stabilisation, my Ulnar nerve was crushed at the elbow and presented very poor signal on Nerve Conduction Studies – as well as horrible nerve pain! This was an unfortunate complication. Again, another surgery – this time a transposition on the ulnar nerve. Things were great until a few months later when a fall caused a dislocation in my elbow. You can imagine my elation (note sarcasm here). Over the following months, the ulnar nerve became so bad that my fingers had completely curled around and the hand utterly useless. My elbow was so unstable that it was dislocating most days. I spent much of 2012 in full arm fibreglass casts to prevent further dislocations and damage to the nerve. There was a slim chance that the casting would stiffen the joint but alas it was not to be. So in December of last year, I had an Elbow Reconstruction and a second Ulnar Nerve Transposition as well. This was by far the most debilitating and painful surgery. To date, the recovery is going reasonably well however I am getting a little sick of the elbow immobiliser!

My symptoms of EDS range from severe joint hypermobilty ( I frequently wake up in the mornings and have to realign my hips and spine), skin fragility, and wound healing issues / clotting issues. Despite all of the injuries and surgeries, I have been able to maintain my career in IT, run a business, keep active and fit as well as continue my passion of riding motorcycles.

You may think “Why is this chick riding a motorcycle around Australia after all of this?” and the answer is – I love riding motorcycles and a ride around Australia has been on my to do list for many years. Raising money for EDS / Connective Tissue Disorders and inspiring others is an excellent bonus.

With my strong will, determination and strength, I power through each day accomplishing whatever I set my mind to. Funnily enough, most people would never guess that I experience these EDS symptoms and are shocked when they discover that I have to work twice as hard to maintain a ‘normal’ lifestyle.

My motto – you can do anything in life despite having CTD / EDS – you just have to plan the approach more than the average person!

Claire Healey loves riding motorcycles and a rides around Australia for EDS  awareness.