Tri-Athlete Continues to Compete Despite Hypermobility

This determined British man competes in triathlons despite his disorder. Geoff spreads awareness for the UK Hypermobility Syndrome Association. 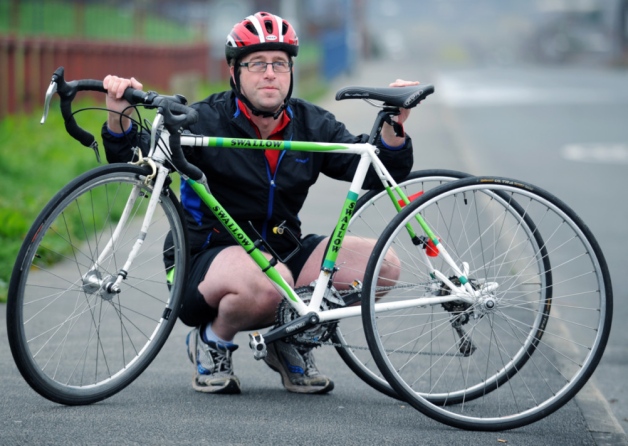 “GEOFF Render has defied doctors after making a remarkable recovery from an accident during a gruelling triathlon.

And this summer he will tackle THREE triathlons on his adapted trusty trike and will even attempt the same tough challenge, which saw him badly injured four years ago.

Support worker Geoff, 35, of Bramley, who suffers from hypermobility syndrome, will take on the Ripon Triathlon which involves a 40km bike ride, a 10km run and a one mile swim.

He will make the triple challenge despite being told he would probably never swim again and struggle to run long distance.

He said: ”The lightweight tricycle is just like a racing bike but with three wheels. It is surprisingly difficult to ride until you get used to it. It is quite amazing I can move so quick, as previous trikes I’ve tried have been heavy and awkward, but I just carry on and really want to complete my challenges. I’m going for the Ripon and the Driffield triathalons and the possibly a Half Iron challenge.”

“They thought I’d had a stroke but it was the diagnosis hypermobility syndrome, which I had suspected I had got, as my mother had died from it a year earlier.”

He said afterwards he was told by doctors and physios that he would struggle to ever run more than a 10km race.

Geoff, who went to Abbey Grange High School, was prompted to get fit after measuring a 40 inch waist and weighing in at 16 stone.

After the accident Geoff was left with disabilities, including floppy joints. His right arm was badly affected.

But he says he was determined to continue training: “Despite what I had been told I did a full marathon six months after being told I would not be able to run for months and probably never swim again.”

He has since completed fell runs including off-road marathons and a triathlon on a recumbent bike.

Geoff, who is a one-to-one support worker with people with disabilities, has also cycled Liverpool to Leeds canal in two days.

You can support Geoff who is raising money for the Hypermobility Syndrome Association (HMSA).”

This determined young man is giving it his all and promoting awareness for the disabled.

Click here for the original source for this article

We appreciate your Links and comments