“No Matter What’s Going on With My Brain There’s Always Music in My Head.” 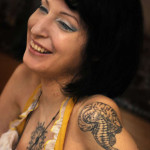 The Bellmawr resident writes edgy, melodic rock songs with titles like “Palinopsia,” the name for an optical disturbance that’s among the debilitating symptoms of Ehlers-Danlos Syndrome.About four years ago, Fatale was diagnosed with the connective-tissue disease, which creates havoc in the joints, spine, and elsewhere. After surgeries left her barely able to move her head, she named her band Great Neck.

“Rather than screaming, I wrote lyrics on a napkin,” she says. “My life’s a musical.”

Fatale writes and performs the soundtrack with Jesse Draham, with whom she shares a house, two dogs, and pretty much everything but the genetic disorder that transformed Kelianne Murray into Anomie Fatale.

“I was always looking for a stage name. I was always the girl who was the first one into the mosh pit,” she says, a fragile yet fierce presence in a camisole-and-vest combo, boots, and wheelchair. Her walker is nearby.

Beneath her stylish slash of black hair, the blue of Fatale’s eyes is startling. That she’s barely able to move her head somehow amps up the power of her gaze.

She brings the same intensity to open-mic night at the Legendary Dobbs, on South Street, and to a Facebook page called “Sick and Sexy.” That’s where she and friends pose in artsy photos that display their disabilities.

“We call ourselves ‘the sicksies,’ ” Fatale says. “Our mission statement is, ‘We’ve been through hell and are hotter.’

Fatale grew up in Ewing Township, Mercer County, and in New Hope, Pa., where she won a songwriting award (“Pervert in Paradise” was her tune) in high school. In 2007 she was getting A’s as a sophomore at Richard Stockton College of New Jersey when she began to experience vertigo and other symptoms.

By 2008, she had been forced to drop out of school and could no longer be independent. “There wasn’t much left in my life,” she recalls.

But while she was living with a friend-turned-caregiver named Mike Penn, Fatale began to write songs again.

“No matter what’s going on with my brain,” she says, “there’s always music in my head.”

Many EDSers are very talented in many ways. What a fabulous way to express your feelings and make a contribution to the entertainment of others.

We welcome comments and Likes regarding this story