My Joints Dislocate Up to 20 Times a Day

Joint dislocation is a major issue with EDS hypermobility. Becky discusses how she deals with this situation. 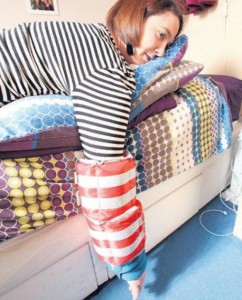 ON THE day I interview her, Becky May has been up for four hours in the night with a dislocated hip.

“Her shoulder and both thumbs have also dislocated this morning and been put back in place by her – and it’s only 10am.

Becky, from Alresford, was a sporty child who played a lot of football, but was very injury prone.

She went to university to train as a primary school teacher, specialising in PE, but that dream was dashed when she dislocated her right shoulder – and it kept happening.

Sneezing or turning over in bed can cause a painful dislocation.

Two years ago Becky, now 26, was diagnosed with a rare genetic condition, Ehlers Danlos Syndrome (EDS), which affects the connective tissue in the body and in the strain she has causes hypermobility and dislocation of joints.

The condition is rare and her doctors failed to recognise it.

“My shoulder started dislocating every day and each time I had to go to A&E,” she says.

“I had a rough time – they thought I was a drug addict wanting morphine, or that I was deliberately doing it myself for attention.”

Becky went on to see a doctor who operated on her shoulder, but the dislocations continued and she was referred to the Royal National Orthopaedic Centre in Stanmore where she was diagnosed with EDS.

Although it is an incurable condition that is likely to cause further joints to start dislocating, Becky was glad to receive a diagnosis and be believed.

Today she is happy and positive, looking forward to a future which may not be the one she had planned, but that she still feels excited about.

But it has been a bumpy road and she has faced crippling pain and depression.

At one point she took an overdose of her medication.

“My shoulder had been dislocated for 40 hours and I couldn’t cope. At the same time I felt I was a real burden on my parents and thought the world would be a better place if I wasn’t here. It was also an accumulation of grief.

“Luckily my mum is a paramedic and when she came home she realised what had happened and took me to hospital.”

This month Becky has launched a website, edstogether.com, to raise awareness about EDS and allow sufferers to share positive experiences and tips.

“I want to help stop other people from getting where I got to,” she explains.

“You can still live a successful life with EDS and achieve lots of things.”

Becky recently went on a threeweek rehabilitation course where, among other things, she learnt how to put her joints back in place.

“Before, one of my parents always had to be available to put my joints back in so it was very disruptive,” she says.

“One day I can be good and another I can be bed-ridden. I hope that I will be able to manage things to live on my own in the future though.”

Becky used to have a very active lifestyle. After she began to develop the symptoms of EDS she became immobile and started to put on weight.

But now she has learnt what she can and can’t do, enjoys swimming regularly and has lost two-and-a-half stone, which relieves the pressure on her joints.

Becky relocating her shoulder using weights attached to her arm

She was forced to put her teaching degree on hold but has recently completed it and now tutors primary school age children in English and maths.

As she is increasingly able to manage her condition, with the help of strong pain-relieving medication, she looks forward to being able to take more work on. her website.

“There are six types of EDS. One type is life-threatening, but I don’t have it,” she says.

“But I remember looking it up on the Internet and being petrified. A lot of what is out there is doom and gloom.

“I wanted to provide a space to say ‘yes, we have these problems, but we can do this and this.’”

This includes positive stories, such as that of Coronation Street actress Cherylee Houston who plays Izzy Armstrong, who has the condition.

“Some people accused me of deliberately dislocating joints for attention,” adds Becky.

“I can see why people would think that. The only way to stop that is by education.

If I can help one person by people understanding EDS more and them not having to go through what I’ve been through, it will have been worth it.”

We appreciate Becky sharing her  difficult journey with Ehlers-Danlos Syndrome.