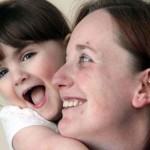 This UK family is dealing with Vascular EDS which is one of the 6 Types of EDS  identified.

“Mum Danielle Wilks and her daughter Lilli-Mae have an extra special bond that no one can break.

The pair have the hereditary condition vascular Ehlers-Danlos Syndrome (EDS), a rare life-threatening disorder which affects the organs and blood vessels.

Doctors discovered they both had the illness last year after they underwent genetic tests following the sudden death of Danielle’s mum Deborah, 47, from an aneurysm.

But they are still determined to live life to the full as much as possible.

Danielle, 30, of Felling, Gateshead, said: “It was devastating when I found out that we had Ehlers-Danlos Syndrome.

“I had no idea what it was and it came as a complete shock to be given the diagnosis and to find out that Lilli-Mae had it too.

“I am trying to carry on with life but it’s always in the back of my mind that we have to be careful as something could happen at any time. I feel like we’re a ticking timebomb.”

There are several different forms of EDS and all share common features, such as loose joints, abnormal skin and fragile body tissues.

The vascular form is the most severe as it means organs   and blood vessels can easily rupture.

For little Lilli-Mae, three, it makes playing with her friends and older brother, Lewis, 10, who does not have the condition, more difficult and dangerous.

Danielle said: “I try to find a balance between wrapping Lilli-Mae up in cotton wool and letting her do the same things as everyone else her age.

“With EDS, people can be very clumsy and if they fall over and cut themselves, it can take longer to heal, as well as potentially causing internal damage.

“It is very hard to take a step back as I’m constantly on edge. But I just take it a day at a time.”

Mum-of-two Danielle, who is engaged to Shaun Wallwork, 36, a technician, first realized her family was affected by EDS when tests on her mum revealed she had the illness and that was her likely cause of death.

“My mum had no warning signs and she just collapsed,” explained Danielle. “We did not know she had EDS.

“I am very wary about going out on my own, as I worry that the same thing could happen to me.”

Danielle decided to get her children tested for EDS as she felt it was important to know if   they had the condition so they could be monitored by specialists. Consultants are able to keep an eye on the progression of Danielle and Lilli-Mae’s condition with a yearly MRI scan.

EDS affects at least one person in 5,000 in the UK and many are able to live a fairly normal life.

May is national EDS awareness month.

In vascular EDS, the skin is often transparent, particularly over the chest, and the veins underneath are easily visible.”

Vascular EDS is a very serious life threatening condition for those with EDS.

Click here for the Original source of this article