Maddy Parker is Ehlers Danlos Ambassador and “Child of Courage”

We have been tracking 11-year-old Maddy’s exceptional work as she raises Ehlers Danlos awareness in Australia. 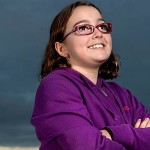 Maddy Parker runs a campaign to raise awareness for the Ehlers Danlos syndrome that both she and her sister suffer from.

SHE’S a cotton wool kid whose joints can dislocate by simply picking up a book, but Maddy Parker has little time for self-pity.

Rather, the sparky 11-year-old prefers to focus on fighting for a cure to help her little sister.

The pair both suffer a crippling condition called Ehlers Danlos syndrome, but Kayla, 8, is afflicted by more severe symptoms.

Maddy’s letter to the “world’’ to raise awareness for the connective tissue disorder won her a Child of Courage Medal in 2012, but she’s not resting on her laurels.

She’s since written to Prime Minister Tony Abbott, convinced the Premier Denis Napthine to raise an EDS flag outside Treasury Place, raised $13,000 to help sufferers and is pushing for a specialised clinic in Melbourne.

The inspirational youngster is now gaining international attention, and is an ambassador for EDS groups locally and in the US.

“The award kind of made me believe that I’m making a change in the world, and people are actually listening to me and learning about EDS,’’ she says.

“My little sister has it twice as bad as me, and I hate seeing her go through so much pain. She has twice as many dislocations as me.’’

Where Maddy’s own body lets her down, her brain more than compensates.

She’s just been accepted into an accelerated learning program for high school next year.

“I’d really like to become a vet and help animals,’’ she says.

Maddy is a former “Pride of Australia” winner who is still making an enormous difference by helping others learn more about Ehlers Danlos Syndrome.