Maddison is at it again!  This ambitious 11-year-old had a successful meeting with Australia’s Prime Minister! She asked for five minutes and got 30! She feels she got her message across and that it will yield positive results in promoting EDS Awareness and a possible EDS clinic in Australia. 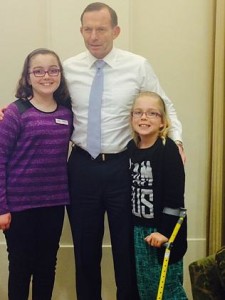 PRIME Minister Tony Abbott will fly the flag for Ehlers Danlos Syndrome next May with Caroline Springs’ Maddison Parker by his side.

The determined 11-year-old’s dream came true yesterday when, after two years of campaigning,she finally sat down with the Prime Minster at a private meeting in Melbourne.

Her mission has always been to raise awareness of EDS, a condition that affects both her and her younger sister Kayla, and push for a connective tissue clinic to be established in Victoria.

Maddison said she was totally blown away by Mr Abbott’s reaction to her cause, and was positive he was on her side.

“He seemed to be on board and said he would chat with Premier Denis Napthine about pushing for the clinic and he said he was trying to put money aside for research.” – Maddison Parker.

Maddison said she was stunned when Mr Abbott unexpectedly asked her to meet him in Canberra next May, Ehlers Danlos Month, to fly the flag for EDS.

“This has been a dream come true, I asked for five minutes and got 30 and I think I definitely got my message across.

“Mr Abbott told me not to give up and that’s made me even more driven.” 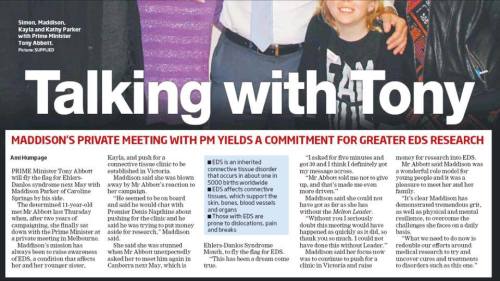 Maddison said she could not have got as far as she has without the help of Melton Leader.

“Without you I seriously doubt this meeting would have happened as quickly as it did, so thank you so much I could not have done this without Leader.”

Maddison said her focus now was to continue to push for a clinic in Victoria and raise funds for research.

“This is not the end, it’s just the beginning, I’m not finished yet,” she said.

Due to Maddison Parker’s persistence, the flag will fly in Australia for Ehlers Danlos Syndrome in May 2015.

Click Here for the original source of this article