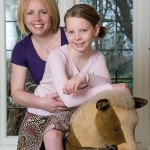 Merrily had problems with her joints.  She was eventually diagnosed with Hypermobility, a form of Ehlers-Danlos Syndrome.

When Merrily, my ten-year-old daughter, complained this summer that the sole of her left foot was sore, I was surprised to find a large lump in the arch.

Our GP put it down to ill-fitting shoes (she lived in Ugg boots at the time), which appeared to have caused a band of ligaments across the arch of her foot to become inflamed.

The Uggs were binned, and the swelling should have gone down within a few days.

Instead, over the next couple of weeks, the lump got bigger until it became so painful she couldn’t walk.

A trip to casualty gave us crutches, but no answers. She was examined by four doctors and X-rayed, but nobody could work out what this lump was. We were urged to get a referral to an orthopaedic surgeon.

Three weeks after this started, Merrily was in constant pain.

Her passions are ice-skating and dancing, so to see her on crutches was heartbreaking.

When we saw the orthopaedic surgeon a week later, he wiggled her feet around, bent her knees and manipulated her arms before taking hold of one of her hands.

‘Watch this,’ he said, and promptly bent Merrily’s thumb so far back that it touched her wrist. I was horrified – we were here to get a diagnosis on her foot, yet this consultant appeared to be torturing my little girl’s hands.

Then I realised Merrily hadn’t so much as flinched. Nor did she when he bent her whole hand back until it was almost flat.