I Have Pain from an ‘Invisible Illness’ called Ehlers-Danlos

Kelly finally received her Ehlers-Danlos diagnosis when she moved to Australia. She shares her story. 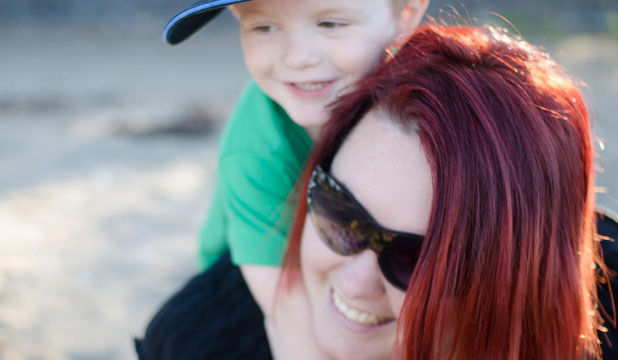 “Looking at me you’d think nothing was wrong. I have what they class as an invisible illness. People often say “but you don’t look sick”. Little do they know how much I can suffer on any given day.

I was diagnosed in 2012, at age 26, with Ehler Danlos Syndrome (EDS). I have the hypermobility (III) form, which is the more common type of EDS, but getting the diagnosis was a very long and painful journey.

Growing up, Mum and Dad used to say I had growing pains as a baby. When I hit school age I couldn’t count the times I rolled over and sprained my ankle – the local A&E got to know me on a first name basis.

At the age of 7 I was sent to Starship to trial a new ankle air cast to see if that would help. It didn’t, and was told I had triple-flex ankles.

We just continued on like everyone else and came to the conclusion that I would always roll over my ankles and it would get easier in time.

When puberty hit, more aches and pains came about, but nothing showed on any X-rays. Because of the pain levels doctors just put me in leg casts or arm casts and hoped that the pain would go away with immobilisation.

My knee caps pointed the wrong way and would slip in an out all the time, and my wrist had an unexplained pain that made it hard to write.

As a 13-year-old I just thought this was normal and tried to suck up the pain and get on with it. I thought everyone woke up tired every morning and felt sluggish and tired all day.

When I started part-time work at age 15, I had days that I would ask not to work the floor and be behind the counter instead because of pain. I was just told to get over it and got the you’re-just-lazy-look, which I totally understood and felt incredibly guilty about, but I’d only ask if it got so tiring that I felt like passing out.

After leaving school I got a desk job, which was much easier for my aches and pains.

After a small accident my shoulders kept dislocating at small tasks like making the bed. I was sick and tired of all the aches and pains and questioned if this was the normal with my doctor.

I went to my doctor once or twice a week for six months trying to figure out what was going on. She told me to go to the gym more and eat even better.

Nothing changed. Anxiety crept in and I had to deal with that on top of everything else. After being told it was all in my head and maybe I need to talk to a psychologist, I gave up.

I moved to Melbourne with my husband and got pregnant. My symptoms got worse and continued after my son was born, with one of my shoulders dislocating up to eight times a week.

After one shoulder dislocation, the pain didn’t leave after it happened, like it usually did, so I went and sought advice from my doctor, who happily sent me off for an MRI to see if I had done any damage (diagnosis: SLAP tear).

I was put with a team to assess my shoulders after this. They were amazed by the amount of flexibility I had in them – so much so that they called in other doctors to have a look at me as well.

After my initial assessment I was sent to the head of physio to help with the ongoing pain management, who out of nowhere asked me if I had lots of sprains as a child, if I could do ‘flexible party tricks’, if I had a fast labour, and a whole bunch of other questions which I answered yes too.

She told me to check out out EDS hypermobility when I got home.

From that moment my life changed.

EDS hypermobility affects 1 in 10,000 to 1 in 15,000 people. From what I’ve found my story is very familiar to most other people with this condition; misdiagnosed or undiagnosed for years.

Even though with my diagnosis I know nothing can be fixed or changed, only managed, the relief of knowing I’m not crazy has completely lifted my anxiety.

I am very thankful to the team in Melbourne who diagnosed me and looked at my whole picture, and I hope in time doctors in New Zealand learn more about this condition.”

Ehlers-Danlos is more recognized in larger communities …. but we have a long way to go to reach our EDS Awareness goals!