Angela Woods is looking for different methods to relieve pain and improve sleep. 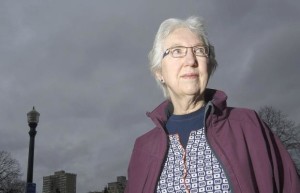 “Over the years, Angela Woods has tried “just about everything” to manage the pain caused by Ehlers-Danlos syndrome.

“I try not to make this the focus of my life—that’s a really poor hobby,” Woods said of the genetic disorder. “Once a year or so I try to rethink what I’m doing and see if there’s anything I can do myself to make it better.”

She happened to be “in one of those spells” of helping herself when she thought of hypnotherapy. She had tried it once before, to help her quit smoking, but it hadn’t helped then. “But that was a different person, a different time,” Woods said. “I can’t imagine it doing any damage.”

One of the physiotherapists she sees said he thought it was a good idea. Woods was attracted to Vancouver Hypnotherapy because “they seemed to specialize in drug addicts. So I thought, ‘That’s a difficult crowd. If they can manage them, they can probably take a good whack at me.””

According to the U.S. National Library of Medicine website, “Ehlers-Danlos syndrome is a group of inherited disorders marked by extremely loose joints, hyperelastic skin that bruises easily, and easily damaged blood vessels.” Gene mutations cause problems with collagen, which provides strength and structure to skin, bone, blood vessels and internal organs.

Among the symptoms is joint pain, which bothers Woods.

“It wasn’t so much debilitating as disruptive,” said Woods. “There can be a lot of pain that comes along with it. If you can manage to keep the pain down it’s not too bad. If you’re not having any luck controlling the pain and you can’t sleep, it can become a problem.”

It only took one session of hypnotherapy, along with recordings, to help, she said. “Listening to the recordings at night worked a lot better than what I was doing before, which was reading before going to sleep. My sleeping improved rapidly. I was only waking up maybe once or at the most twice a night.”

The recordings were “nothing startling,” Woods said. Paraphrasing the hypnotic instructions, she said, “‘Look at the big red dot in your mind and follow it into the sunset and relax your elbows.’ It’s something you’ve heard a thousand times before if you’ve done yoga or anything like that.”

Woods had also begun taking a newly prescribed drug for the pain at the same time as her first hypnotherapy session, which was in August 2012. “The combination worked really well. I believe that the hypnotherapy played as much a part in that as the drug did. I occasionally will forget to take the drug and I’ll still go right back to sleep if I get that MP3 player out and listen to it.”

Complex pain specialist Dr. Pamela Squire, whom Woods has seen about her condition, said she will often suggest hypnotherapy to patients. Pain has a context, Squire said, and is evaluated on the basis of other things going on around it. For instance, if you’re having a bad day and you stub your toe, you’re more likely to rate the pain at a higher level than if you hurt yourself on a day you’re picking up a lottery cheque. “Although hypnotherapy might not change the stimulus, it can affect the emotional part,” Squire said. “But can it affect how much pain bothers you? For sure. It relieves stress, in some people.”

Woods has gone back for another hypnotherapy session, this one to work on her posture. That too seems to have helped. “What she (the hypnotherapist) told me to do was very easy, and made a bigger improvement than what anyone I’d dealt with before had told me.”

Woods said she always tells doctors what she’s done that seems to have helped her condition. “When I was thrashing around looking for things that might work, quite often somebody would say, ‘Oh, that’s kind of out-there, there are a lot of other things you can try first.’ So I ended up delaying getting something that did work by a year or two.”

She feels the need to “raise the flag a bit” when it comes to treatments that have helped her. “That’s why I’m doing this interview, too. There are a lot of people who are very frustrated about the fact that they’re quite uncomfortable and no one’s taking it seriously.”

Hypnotherapy is an alternative treatment that this EDSer uses to help reduce her pain.