Helen Overcame Ehlers-Danlos Syndrome to Compete in a Triathlon

While initially diagnosed with Fibromyalgia, Helen eventually found out that Ehlers-Danlos Syndrome was the cause of her pain. 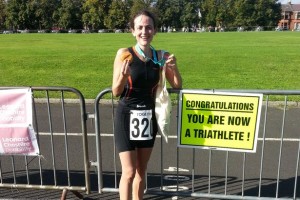 “An inspirational Paisley woman has told of her joy at completing a tough triathlon…two years after being so unwell she struggled to stand up.

Helen Rice, 36, had been left in such constant agony that everyday living became impossible.

In crippling pain, she couldn’t stand for long enough to make a cup of tea.

Her muscles had disintegrated to such an extent that maneuvering herself to sit upright was so excruciatingly difficult that she spent days stuck in bed.

Then, in 2011, Helen was diagnosed with Ehlers-Danlos Syndrome – a rare illness that targets the body’s collagen proteins, which are building blocks that strengthen and support various body tissues.

The diagnosis – which came after nine years of living with the illness – proved to be a turning point for Helen.

Since then, she has rebuilt not just her muscles but also her confidence…and her life.

Now, having completed the Tri Together Glasgow triathlon, battling Helen can look back on how far she has come over the last two years.

She told the Paisley Daily Express: “I couldn’t measure how much better my life has been since I was properly diagnosed. It’s truly off the scale.

“Completing the triathlon was a huge milestone for me, both personally and physically. From being unable to do anything and get to where I am now makes me so proud.”

Helen’s health problems started more than a decade ago.

She explained: “I was living in London, working as a researcher, in 2002 and started having problems with everyday life.

“I started to notice that, if I had to stand somewhere, such as the Tube or the bus, it was really painful.

“The pain was basically all over my body and was strongest in my legs and back. I went to see a doctor about it but all the tests found nothing.

“My symptoms persisted and the pain was growing. I was becoming chronically tired, so much so that I was really struggling with work and had to go part-time.

“By 2007, the pain had become so unbearable and I was so short on stamina that I had to stop working.”

Pushing for medical support, Helen was eventually diagnosed with Fibromyalega – a long-term condition which causes pain all over the body and isn’t uncommon among women.

The Fibromyalega then led to the much rarer Ehlers-Danlos Syndrome.

In 2009, Helen and her partner Kenny Robertson, 46, moved to Renfrewshire, taking residence in Ralston so they could care of his father.

Out of work and in new surroundings, Helen was hampered even further as her condition worsened.

She said: “You look at me and there’s nothing wrong but, inside my body, I’m not producing collagen correctly.”

“After years of not doing very much at all besides resting, nearly all of my muscles had wasted away.”

“I had no strength at all. Even sitting upright on a chair became a huge exertion.”

“It was a very grim time. There were days when my condition would flare up and I couldn’t get moving at all.”

“Having the correct diagnosis helped me. I then knew what was happening and what I’d have to do to help myself.”

She was admitted to the rehabilitation unit at Inverclyde Hospital in early 2011 and, from there, went for hydrotherapy at Paisley’s Royal Alexandra Hospital.

Helen said: “I started to build myself a life again.”

“With EDS, my joints are hyper flexible because of the lack of collagen. They stretch much more than normal and that’s where my pain comes from.”

“My ligaments and the rest of my body work six times as hard as normal when I’m working any muscles. That includes standing still because, even in doing that, you work specific muscles.”

“As a result, I wake up every morning feeling like I’ve run a marathon the day before.”

“My recovery involves forcing myself to work through the pain of these aching muscles.”

“The first months were very tough but, as I started to do exercises without collapsing, it was just the most amazing feeling.”

“I was starting to go from nothing to something.”

These achievements gave great encouragement to Helen, who describes completing her first length back in a swimming pool as “the best day.”

She added: “I then set myself the goal of being able to do 40 lengths, saying that, when I could manage that, I’d set myself a new target.”

“Funnily enough, the day I finally managed 40 was the day I saw the sign advertising the triathlon.

“To have now completed that is a great milestone for me.”

With that challenge now behind her, Helen is looking to the future with uninhibited optimism.

She has even had a tattoo done to celebrate what she has achieved in the last two years.

Helen said: “I’ll always have pain as there is no cure for EDS but, by staying fit and working myself, I can improve my way of living.

“The tattoo marks a hugely-significant part of my recovery.”

Helen achieved her goal in spite a major struggle with Ehlers-Danlos Syndrome.