Eleven-year-old Hayley continues to compete in beauty pageants despite her struggles with Ehlers Danlos Syndrome.  Hayley uses this as a platform for fundraising and to spread EDS awareness! It’s a family-orientated competition where entrants must take part in a community project – extra points are awarded to those raising money for charity and helping in the community. 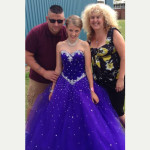 A schoolgirl who lives on the outskirts of Exeter has been crowned Miss Dorset.

and lives in Clyst Honiton, won the UK Dream title against tough competition at a beauty pageant held at Wareham.

Hayley, who suffers with Ehlers–Danlos syndrome (EDS), an inherited connective tissue disorder that effect her joints and muscles.

She the youngest daughter of Shirley and Ian Bristow who have two other daughters.

Said Shirley: “We are all immensely proud of what Hayley has achieved. She has won through to the finals of the Miss UK Dream competition and has helped raise money for the charity.

“She is the most beautiful girl and has done remarkably well.”

Although Hayley suffers from day to day with joint pain and tiredness she has been working hard to raise money for EDS and was doing pageant as a way of raising awareness for the charity’s work.

The family-orientated beauty pageant is a community based competition where entrants must take part in a community project, with extra points for those raising money for charity and helping in the community.

Hayley is doing her part to raise awareness of Ehlers Danlos Syndrome.