During this canine birthday party a  collection was taken by the band members for the Ehlers-Danlos Syndrome (EDS) Network Foundation for children with catastrophic conditions and for the Roofs for Woofs non-kill animal shelter and adoption center. 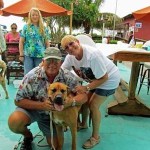 “It may have been the first, but positive comments made by guests indicate it certainly will not be the last “Yappy Hour” to be held on the Isles of Capri.

Michael and Gail Cochran, who have enjoyed many good times and created many lasting memories with family and friends at the Isles of Capri Island Gypsy Marina Bar, held a rather unusual event on Friday.

They invited residents and friends to bring their pooches to a birthday party for their dog, Gypsy Sue. Guests are still talking about the fun and goodness this unusual party created.

The couple became engaged at the bar – and later were married there. It was only natural that when they adopted their part bull mastiff and part boxer-mix puppy, they would name her Gypsy.

Gypsy turned a year old last week, and to celebrate her special day, they felt the need to make the day special for others as well. The others referred to here are dogs who have no homes housed in Collier County shelters.

In lieu of a birthday gift for Gypsy, guests were invited to bring a bag of dry dog food to donate to the shelters.

The response was overwhelming. Guests arrived with their doggies on leashes and their arms filled with dog food and milk-bone treats.

Dogs of a variety of breeds and sizes gathered. One of the most entertaining was Mr. T, a large Harlequin Great Dane owned by Bob and Deonna Beckett. Mr. T became a bit frightened by some of the other dogs. He crawled up sat on Deonna’s lap for protection. Who would have thought that the largest dog at the party also was the most timid!

There were party hats, birthday favors and even a home-made birthday cake for the dogs to eat. Diane Reid, whom the Cochran’s refer to as Gypsy’s Auntie Di, made the dog’s cake in the shape of a fire hydrant and topped it with colorful birthday candles. While the dogs visited and played with one another, the human guests got their fill of delicious assorted pizzas provided by the Cochrans.

Being a dog owner is not all that keep the Cochrans busy. Michael Cochran works with Artichoke Caterers as a marketing consultant. He is also holds a 100-gross-ton captain’s license. Gail Cochran is a pharmacy technician at Costco of Naples.

An unexpected surprise was the appearance of a newly formed band known as the Honey Creapers. The band consists of Prana, John Butler and Randy Hilderman, who created a harmony reminiscent of early blues, with some folk inspiration and a bit of Motown funk and rock.

The audience enjoyed their unique style and blend of talents. A collection was taken by the band members for the Ehlers-Danlos Syndrome (EDS) Network Foundation for children with catastrophic conditions and for the Roofs for Woofs non-kill animal shelter and adoption center.”

“I did not think up this idea on my own,” said Michael Cochran. “When I lived in Key West about 10 years ago, there was a man who owned a dog track there. He abandoned the track and the dogs. When the community learned of this, they gathered and brought enough food to feed them. Within five hours, every abandoned dog had been adopted, and now they have birthday parties for their dogs to encourage the donations of food for shelters.”

This was a unique way to raise EDS Awareness and funds for Ehlers-Danlos Syndrome (EDS) Network Foundation for children.