Emily is Learning About Ehlers-Danlos Syndrome

Emily is going through the diagnosis for Ehlers-Danlos Syndrome and has support from family, teachers and friends. 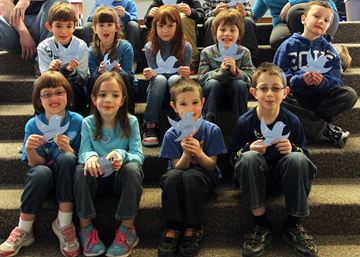 Emily Landry, second from left in front row, sits with some of her classmates at St. Patrick School during a Dress Blue Day in support of the Arthritis Society.

“There are only three steps to the Landry family’s backyard treehouse, but to six-year-old Emily it might as well have been a mountain to climb.

A rare genetic condition affects Emily’s joints. Climbing stairs is something most people take for granted but to Emily it’s nerve-racking – especially when the steps are unfamiliar.

“The boys, of course, they’re flying up and down from the treehouse…but Emily, it took her forever to finally gain the confidence to go up the ladder on her own,” mom Amanda said.

The Brantford girl is being tested for Ehlers-Danlos syndrome, an inherited genetic condition that affects the connective tissue in the body. It’s notoriously hard to diagnose. Typical symptoms include stretchy skin, loose joints, fragile body tissues, along with chronic and excruciating pain.

“We’re just thankful that she’s not in pain and suffering as bad as a lot of the cases that we’ve read about. She lives a pretty normal life,” dad Scott said.

The Landrys expect a definitive diagnosis from a specialist at McMaster Children’s Hospital this summer. They’re hoping and praying it’s not the type of Ehlers-Danlos that can affect the connective tissue of the heart. Thankfully, early signs are that it is not that type.

There have been many trips to McMaster for Emily.

Emily’s parents knew their daughter had health issues from birth. Their concerns grew when she was late walking. When she began waking up through the night complaining that her hands hurt they insisted on getting her in to see leading Brantford pediatrician Dr. Philsamma Padamadan, who suspected Ehlers-Danlos.

Tall and lean, Emily says she likes to sing and dance and play with her Strawberry Shortcake doll.

Playing sports is a struggle, though, both physically and emotionally, because her joints don’t allow her to keep up with the other kids. Her parents enrolled Emily in dance as an alternative to sports, and while she enjoyed it, some of the moves were too risky for her highly flexible joints.

“She is very self-aware of her limits,” Amanda said. “We never push her – if she’s not comfortable doing something it’s for a reason, and that’s cool.”

Swimming, because it’s more gentle exercise, and piano lessons are up next for Emily, on the recommendation of the pediatrician.

Amanda and Scott praised the teachers and staff at St. Patrick’s School for accommodating Emily’s special needs, such as modifying gym activities.

“She’s been at school before saying she has to come home because she is in too much pain, but they’ve always said, ‘we will administer her Tylenol and heat up her bean bag for her.’ That way she can stay and participate. Otherwise she would miss so much school, especially in this type of weather,” Amanda said.

Ehlers-Danlos syndrome is a group of disorders, including six major types classified according to their specific symptoms. About one in 5,000 people is affected.

To help Emily gain muscle, she eats a high-protein diet before going to bed to keep her from burning off the nutrients as quickly as she does during the day. She says her favourite foods are cheese, hamburgers, strawberries and chicken.

Emily’s older brother, Tyson, 9, and younger brother Evan, 4, do not have Ehlers-Danlos.

Amanda and Scott are grateful for the support Emily has received at Lansdowne Children’s Centre. The Brantford treatment facility for children with physical, communication and developmental needs provided Emily with occupational therapy to improve motor skills with her hands and also speech therapy.

“They’ve built her confidence with going up and down the stairs because she wouldn’t do that at first,” Amanda said.

People with Ehlers-Danlos are more at risk for early onset arthritis.”

“Fortunately Emily is not in pain” and adjusting to a routine that accommodates the life style with Ehlers-Danlos Syndrome.